Look! Look at me! We do wearables, mobile stuff too! says Intel today

CEO Krzanich talks up Broadwell successor Skylake for 2015 and more

IDF 2014 While most of the industry's eyes were on Cupertino with its new iPhones and Apple Watch on Tuesday, Intel CEO Brian Krzanich took to the stage at the Intel Developer Forum (IDF) in San Francisco to explain how Chipzilla will be at the heart of mobility, wearables, and the Internet of Things (IoT).

"If you believe Gartner, wearable devices will drive 50 per cent of the total application interaction in just three years, by 2017," Krzanich said, raising the big "if."

He added that he thinks of the IoT industry as "kind of a 'wearables for machines'," and that Intel's sponsorship of both the Open Interconnect Consortium and the Industrial Internet Consortium demonstrated its commitment to that business.

Intel expects to be able to grow its IoT sales by "something north of 20 per cent per year," Krzanich said.

As an example of how Chipzilla is helping hardware builders create new devices, he talked up the company's Edison Raspberry Pi–alike developer board, which he said Intel is aiming to deliver at approximately $50 retail cost.

On the wearables front, Krzanich invited Fossil chief marketing officer Greg McKelvey onstage to talk about his company's recently announced partnership with Intel to build smart watches – but unlike Apple, Fossil has nothing to show so far.

Krzanich did say, however, that every IDF attendee would receive a coupon for a free pair of BioSport In-Ear Headphones from rapper 50 Cent's firm SMS Audio, so don't say that Intel isn't all about wearables. 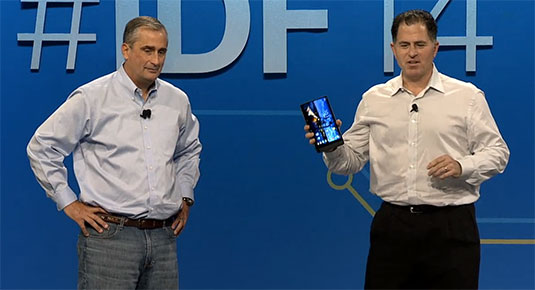 Intel is still about PCs, too, despite all the nay-saying.

Although devices based on Intel's 14-nanometer "Broadwell" architecture are only now heading for market following some manufacturing delays, Krzanich said that "Skylake," Broadwell's successor, will be in developers' hands by the first quarter of 2015 and that the platform will launch by the second half of the year.

To prove it, Intel PC chief Kirk Skaugen showed off a reference Skylake device that he said was running full 4K resolution video, although your humble Reg hack was unable to count the pixels.

Krzanich also invited Michael Dell onstage to crow about his eponymous firm's upcoming Dell Venue 8 7000 fondleslab, which at 6mm thick he described as the "world's thinnest tablet." The device is also the first to feature an Intel RealSense camera, which can take "3D" images and determine the size, depth, and contours of objects.

The Venue 8 7000 is an Android device, and Skaugen said Intel is committed to supporting that platform, in addition to Windows, OS X, Linux, Chrome OS, and whichever other operating systems its customers choose.

Where Android in particular is concerned, Intel has forged a new partnership with Google to get the OS running on more devices based on Intel chips, which so far have taken the backseat to ARM in the mobility market.

The Intel Reference Design for Android (IRDA) is a new platform designed to slash hardware makers' time-to-market for Intel-based fondleslabs. Chipzilla has committed to delivering new software builds for it within two weeks of changes to the Android open source project (AOSP), and Krzanich said the first release will be available to developers by the 2014 holiday season.