Passenger had Something To Declare, instead fiddled while plane burned

A pile of lithium drone batteries checked as baggage on a flight from Australia to Fiji could have had nasty consequences: a bunch of the Li-Ions burned in the hold of the plane.

Fortunately for the idiot traveller whose baggage declaration said “no batteries” – and the other passengers on the Fiji Airlines flight in April – the fire was noticed before the Boeing 737 left the ground.

Australia's Air Traffic Safety Bureau (ATSB), which has just published its investigation of the incident, says that during pre-flight checks, a ground engineer alerted the captain to “white heavy smoke billowing from the hold”. The first officer advised that the aft cargo fire warning light was illuminated; the fire suppression system was activated, and the plane evacuated. 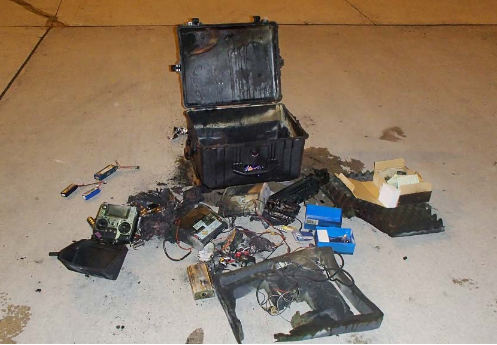 The ATSB investigation attributes the fire to a short circuit involving the batteries, drily notes the importance of declaring batteries in luggage, and reminds travellers to pack their batteries properly to avoid short circuits. ®