The LTO consortium has added two more generations to its tape format roadmap, extending it out to LTO-10 and a 120TB compressed capacity.

The roadmap used to finish at LTO-8, and that version of the LTO tape format future was announced in April 2010. Now, four-and-a-half years later, it has been extended again. 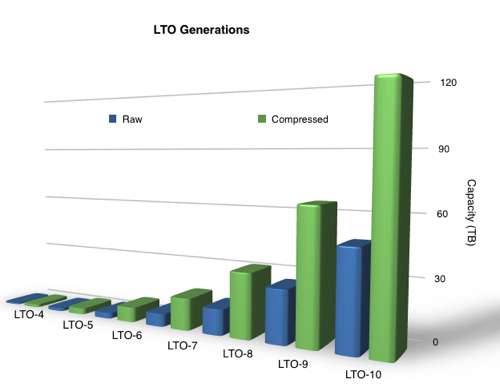 The new formats are LTO-9 and LTO-10. Here is a table showing LTO formats 6 - 10 and their raw and compressed capacities and data transfer speeds:

We might assume each generation leasts for 2.5 years before the next one is introduced.

An extension to 120TB capacity with a transfer speed reaching 2.75GB/sec is strong evidence that the three LTO consortium members - HP IBM and Quantum - see a continuing healthy demand for tape and its role as an archival data medium. Their release quotes Joel Tax from the Santa Clara Research Group: “With a road map showing four more generations beyond the current one, the LTO Program has shown commitment to innovation and support for the format.”

Sony, which used to a be a force to be reckoned with in the backup and archive tape market with its AIR and Super AIT formats, has developed a 185TB tape technology.

The role of tape as the lowest-cost archive medium should continue with these capacity increases. Tape users can be confident that all three consortium members see a need for tape products meeting these format requirements out to 2020. ®