Concerning VMware’s vCloud Air: It's all about choice

'Niche' cloud player in the only niche that matters, says Trevor Pott

As an examination of "hybrid cloud done right", I am going to take a look at VMware's hybrid cloud offering, vCloud Air. vCloud Air (formerly called vCHS) is largely what the cloud was originally promised to be: access to a seemingly unlimited pool of resources upon which you can run your own workloads.

Using vCloud Air requires no changing your procedures, no converting your applications, no rewriting the entire thing from scratch. What you have goes into the cloud and "just works". And then it can come back again. There's no vMotioning to the cloud – yet – but pretty much everything else is in place. 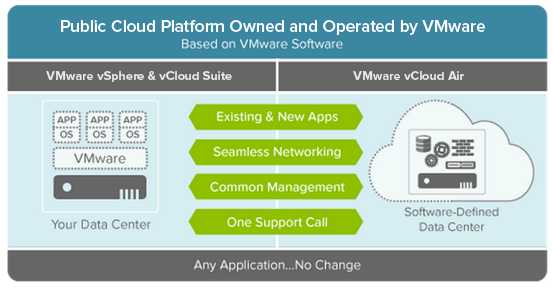 The vCenter server is needed because vCenter is the very core of VMware's offerings. It's the magic glue that holds your VMware environment together. vCloud Networking and Security manager is essentially the VPN server that bridges your local network to the virtual datacenter running on the VMware side. The vCloud Connector virtual appliance is the bit that talks to your vCenter server, VMware's cloud and makes sure the VMs get from A to B.

Easy, peasy. It took me about a half an hour to get it running from scratch. Moving VMs into the cloud has proven no difficulty; the hardest part of it all was making sure my VMs were ready to handle the networking environment they'd find on the other side. That honestly didn't take much, and off I went!

No, I will not fix your computer

I am sick of fixing people's printers. I don't want to hold hands and sing kumbaya and hope the point of sales server will make it one more day. I am tired of the endless séances and casting of entrails over dead hard drives, hoping that with the right incantation (and the application of a freezer) I might get the drive online just long enough to extract that one, precious document.

I am sick of building IT. It was fun, once, a decade and a half ago when there were a limited number of Legos and the shape of things was determined only by your imagination. Now, today, for any given problem there are eleventy billion different options and painfully few operable solutions.

I want to get back to making computers do things. To using the technology to improve the lives of others, or at least to make a business more efficient. Having access to a well designed and functional hybrid cloud solution is a part of that.

I'm known for belly-aching about "the cloud". There are a number of well documented complaints on my record, but the one thing I really do want from the cloud is the ability to send my workloads into the public cloud unmodified when needed, and bring them back again when not.

I don't want to have to massively overbuild my local networks to handle every conceivable outage. I want to build "just what I need" and use the public cloud for spillover. If something goes splork on my local network, hey-hey, there's that great big box of awesome just across the internet for me to use until that mythical "four-hour enterprise service" shows up and spends three days figuring out what went wrong.

This is why VMware's vCloud Air has me interested. I don't care that VMware is "late" to the cloud party. Who cares? The past is the past and right now, today, I want to get my existing workloads in and out of the cloud without fuss.

Some – and those squinty eyes are aimed squarely at you, Gartner – call VMware a "niche player" with regards to public cloud computing. It's a term that sounds bad, until you realise that vCloud Air occupies the only niche that actually matters.

What do you mean "throw it all away?

"Traditional" public clouds are not amenable to you simply plopping your own workloads down upon them. To really take advantage of them you need to basically throw your existing applications away and recode things from scratch. "Burstable" computing isn't possible with traditional applications, and you pay a hefty price for running base (mostly idle) workloads on someone else's iron.

If your goal is the creation of a new startup, or a new business application, or a new anything then hey, the old-style public clouds are good. You can design everything to spec, use all the new APIs and featuresets and attend church twice every Sunday to pray to your deity the cloud provider doesn't change any of it.

VMware doesn't have the same level of Platform as a Service offerings as the others. It is an Infrastructure as a Service play, and good on 'em. You want a "platform"? Deploy a vApp. "Platform" is just a fancy way of saying "someone else installed some operating systems into some VMs and configured them for you." That is what a "virtual appliance marketplace" is for.

Bonus points: by using appliances, you can use the same "platform" on your own network as in the cloud with zero additional effort! Magic!

The federation wants YOU!

VMware doesn't exist in a vacuum. It's both part of the EMC federation and the center of its own massive software, hardware and services ecosystem. If you want awesome platform as a service happy fun times you turn to Pivotal. They'll integrate great with your local VMware installation and vCloud Air.

If you want automation, orchestration, software defined storage/networking/who-knows-what-else, they can deliver that too. VMware's investment in Puppet has naturally made both companies grow a lot closer, with benefits for both parties. If Puppet isn't your thing, VMware's vCloud suite and vCenter Orchestrator can be utilised to deliver automation and orchestration that will rival any public cloud.

What's more, nothing about VMware's approach to things prevents you from using other public clouds. Got a need for some AWS to underpin your new marketing app? Go right ahead, VMware won't mind. Heck Amazon even built an importer for vCenter (actually pretty bad, but I expect it'll improve soon) in the hopes you'll move your VMware workloads into their cloud instead of VMware's.

Those who run public clouds recognise that on-premises infrastructure isn't going away. The business case just isn't there to support it. From data sovereignty issues to sheer cost, it's always going to make sense to run some workloads on site. Heck, even Microsoft isn't prepared to eat its own dogfood; the workloads that their company actually depends on are staying on traditional infrastructure, and not moving to its own Azure public cloud.

I'll tell you what I want, what I really, really want…

I want a solution that acknowledges this; one where my on-premises infrastructure isn't considered a second-rate afterthought, or a millstone of the past dragging down the coveted and almighty subscription profits.

I want the ecosystem: the explosion of cooperation and competition that VMware's partners – and enemies – bring to the table. I want the 500,000 paying vSphere installations – and the hundreds of thousands of hobbyist/free installations – all out there running into problems before me.

I want to run any application I need, on any OS I need

I don't want to be able to "pick any operating system, as long as it's black"; I want to run any application I need, on any OS I need, and not throw away decades of investment in my existing software infrastructure just because the public cloud has a subscription model and a new API.

I need the ability to choose where my data lives. Does it live on my own premises? A cloud provider subject only to the same laws as me? Or can I toss it into the American cloud and subject myself to their laws?

VMware isn't the first cloud provider. I will, however, argue that there is a good chance it is the best cloud provider. Not because VMware has special knowledge, not because it has got reputational superpowers or some marketing tripe about "stacks" and "integration".

VMware is the best choice because it offers choice. Because its offering is about providing you the tools to get things done the way you want them done. VMware is the best because very, very little of it actually needs VMware-anything to work; because there's a competitor or a partner, a VAR or an MSP waiting to provide you what you need.

The core infrastructure is VMware. Your workloads live on operating systems that work on a VMware-compatible hypervisor. But every other aspect of that stack is something that VMware has to fight tooth and nail for. The end result is something we want and need. Not something we are told to simply accept, because "it's the future."

What about you, dear readers? Where do you stand with regards to the cloud? Public? Private? Hybrid? Let us know in the comments. ®