Review David Wood, one of the founder executives of Symbian - and the one who saw it through to the bitter end - has written a book. A very big book.

Smartphones and beyond: Lessons from the remarkable rise and fall of Symbian tells the entire story from Symbian's conception, to world domination, to its rapid demise, and it must be one of the most candid and revealing books a technology executive has ever written.

It's currently No.1 in Amazon's mobile and wireless section.

Of course, it's popularly considered to be a story of failure. Although Symbian was in hundreds of millions phones, and for years powered the most-bleeding edge mobile tech, Android today is everything Symbian set out to be: creating a rich platform for modern smartphones and tablets, on which other industries built their services. And that's what makes this story interesting - much more interesting than if it had been a roaring success. The mobile industry today today is defined by what Symbian wasn't - or by what it failed to do well. For example, you'll have a much better understanding of Samsung from reading this book.

Although Americans today have a very different history of smartphones, in which Symbian doesn't figure, for the rest of the world it looked very different. Symbian dominated it for a very long time, either implicitly (no mass market phone shipped until four years after the venture's foundation) or in reality. With Nokia putting huge resources behind Series 60, Symbian's share of the smartphone business rarely dipped below 60 per cent. It was practically the only game in town for creating rich devices for many years - without it ever being a consumer brand, as Android is today. 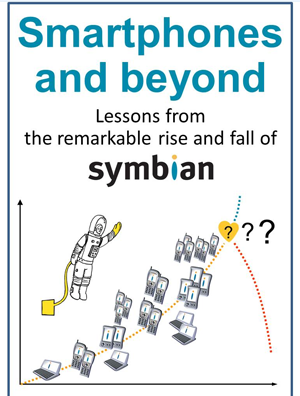 The the sheer volume of detail in David Wood's book might overwhelm the casual reader. It's a linear narrative drawing on diary entries, business plans, memos, emails, and presentations; entire press releases and news stories are quoted (apparently without permission - naughty). The story is condensed into bullet points on almost every page. It needs an index to the hundreds of codenames (Symbian never refer to licensees or partners by their real name - in a kind of weird Secret Seven code). And some sections could have been radically condensed or snipped entirely without losing anything. It comes to well over 300,000 words, or 800 pages in regular typesetting (it's only an eBook right now).

But Wood reflects on many key decisions with completely fascinating digressions on counterfactual histories. "Could we have made a better decision - or done things differently?", he often asks. These counterfactuals probably help give us the most comprehensive account of the real dilemmas players in the mobile industry faced over the past two decades anyone has put to (e-) paper, as they pick out trends that are important but not obvious today. And Wood is so brutally candid and honest, nothing is spared.

Reading it, I was often left wondering how Symbian produced anything at all - let alone survived for so long. Such were the delays, political machinations of its shareholders and licensees, and painful mismatches between them all. Hyped as the most important company in the world - a hype it helped stoke, Wood confesses - it didn't power a mass market phone for four years. It over-promised then retrenched.

Symbian might have been the best choice for phone makers for years - but it could be a very painful choice too. Symbian was unable to deliver platform software on time for years - delays are the recurring motif of the book. It required device manufacturers to undertake painfully expensive integration, because the parts needed to make a Symbian phone didn't fit nicely - there were multiple UIs. The base ports (code for a specific hardware), Wood writes, were immature or buggy. There should have been nice, off-the-shelf reference implementations - Linux at the time had hundreds. All these things are taken for granted by manufacturers using Android or Windows Phone today. Even when Symbian got its defect count down and speeded up its delivery, Nokia couldn't use the platform release, as integrating its own half of the Symbian proposition was too difficult.

This created cost, and for years, the large costs of creating a Symbian smartphone were largely hidden.

Boy, were we wrong: confessions corner

You would expect the former exec of a colossal failure to self-justifying. Not so. In the "phoney war" between 1998 and 2002 when hardly anything shipped from the much-hyped venture, projects were being cancelled left, right and centre. "We had our handy, blame-defecting explanations" Wood writes.

Looking back at emails at another, particularly fraught period when Nokia - which had the biggest bet on Symbian - wanted some clarity from the company, Wood notes:

"I see only an intensely pragmatic attitude from the [Nokia] Calypso team, which elicited only faltering responses from the Symbian side."

Years later, as Symbian struggles with its eternal dilemma of trying to be a predictable software factory and yet be responsive to customers urgent requests for additions, Wood confesses: "Our approach.. almost guarantees that this misalignment will occur."

A cross-department "Matrix Team" approach was tried out, to cut through the bureaucratic turf-wars, but it became a bureaucratic exercise itself - and forgot to include customers.

At one point when Ericsson demands a vital piece of connectivity (OBEX) is supported, Symbian's chief of software development Kent Eriksson fumes: "we must convince them they don't need it. They just cannot come like this outside the requirements when we are already have full speed to implement what has been asked for". [sic]

We're not spared anything in this tale. The Employee Satisfaction results and exit interviews of key employees ("sausage factory"… "authority without responsibility") are related. The move to open source Symbian and unify it with the UI layers eventually takes place, but it's a flop: it only reminds everyone what a politically tense venture it was in the first place. Nokia distances itself from it. Licensees drop it, and developers who never liked it, fail to contribute substantially to the code base.