Hey, HP shareholders! Mike Lynch is set to buy a 180-foot superyacht with his Autonomy loot

'It's tough keeping up with the Whitmans' 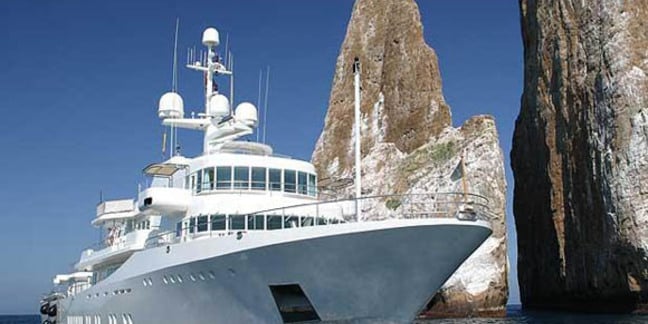 Exclusive Mike Lynch, the man whose sale of software biz Autonomy to HP resulted in an $8.8bn writedown at the US titan and ongoing probes by the Serious Fraud Office, the US Justice Department and the SEC, is set to splash out some of his gains on an enormous yacht.

Sources tell The Register that Lynch is engaged in purchasing a superyacht more than 180 feet long and costing north of $30m. Lynch personally trousered a cool $500m when Autonomy was sold to HP in 2011.

At the time, he was hailed as "Britain's Bill Gates", but the dream turned sour, with HP claiming that Autonomy had been wildly over-valued and that the firm's books had been cooked. The US tech giant subsequently wrote down an eye-watering $8.8bn to correct its own books, and financial cops on both sides of the Atlantic opened probes into the affair.

Subsequent shareholder lawsuits against HP management for bungling the deal have yet to be entirely resolved, though both the company and investors have agreed to team up for "potential litigation" against Lynch and other former Autonomy executives such as ex-CFO Shushovan Hussain.

Lynch for his part has always denied any wrongdoing. Though Autonomy was actually purchased under the supervision of HP's previous CEO "Mad Leo" Apotheker, much of Lynch's running battle has seen him trading blows with current HP chieftain Meg Whitman. In July, Lynch issued a statement accusing Whitman of making "false allegations" and characterising HP's actions as a "smear campaign".

Asked to comment on his purchase of a new and enormous superyacht, a spokesperson for Mr Lynch said: "It's tough keeping up with the Whitmans".

Ms Whitman - though a billionaire in her own right - doesn't appear to own a yacht, and HP representatives declined to comment on the matter.

We do note, however, that former HP CEO Carly Fiorina has two: but both are dwarfed by Mr Lynch's huge new 180-foot toy. Ms Fiorina's West Coast boat is a puny 70 feet, and her East Coast vessel just 56. ®