Vid The massive solar storm bathing Earth in radiation this week was a significant event not for its strength, but for its timing, say astronomers.

On Wednesday, scientists detected a couple of coronal mass ejections (CMEs) which have been showering our planet, and will continue to do so over the next two days. As the peak of the high-energy radiation interacts with Earth's magnetosphere tonight, expect to see auroras – and perhaps experience some interference to radio communications.

The flares – one an X1.6 burst – are capable of disrupting radio communications and global positioning system (GPS) satellites. Radio hams picked up howls of static from their equipment soon after the leading edge of the storm intercepted Earth.

But before you panic, Nathan Schwadron, associate professor of physics at the University of New Hampshire, has told us this week's flares are weak compared to solar weather that's battered our home world in the past.

"Basically," he told The Register today, "these events are pretty wimpy."

Schwadron, who studies space plasma physics with the university's Institute for the Study of Earth, Oceans and Space, said the significance of this week's storm lies not in its strength, but in its circumstances. He explained that 2014 has been an unusually quiet year for CME activity with very few events detected. This, he said, is the continuation of a downward trend in activity that dates back to 2006.

"This is the first event in a number of months. It has been very quiet throughout the summer," he said.

"We had spotless days, which is unheard of during a solar maximum."

The slow period had led some astronomers to suggest that we may be transitioning into a solar minimum, a lull in solar flares which in the past had coincided with cold periods on Earth. With the renewed activity, there is renewed reason for debate about what precisely is going on with our nearest star.

This, says Schwadron, could signal the beginning of a fascinating new period which astronomers have not seen since the dawn of the space age.

"We have not seen these types of cycles before," he said.

Where to see the auroras

The Northern Lights could be intensified by this week's flares, and people in northern Europe, Asia, Canada, and the north of the United States may see some bonus auroras. The best time to see them will be on Friday night, according to Accuweather: 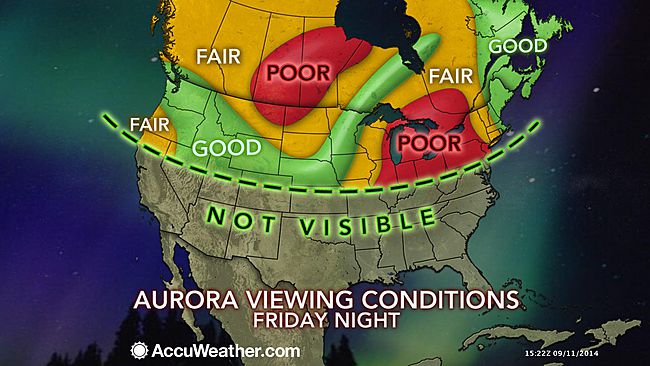 As a top tip, DSLR cameras will pick up the lights better than the human eye, suggested AccuWeather's astronomer Hunter Outten.

Meanwhile, the US government's Space Weather Prediction Center noted today: "The second of the expected coronal mass ejections has arrived. As expected, an initial looks shows this CME is stronger than the first. G2 (Moderate) storming is underway now and the forecast for G3 (Strong) storming on the 13th still looks reasonable.

"The solar radiation storm that is in progress as a result of the eruption on September 10th." ®