Page File Prepare yourself for a book that’s so exactly like a late-90s Steven Seagal movie, it’s uncanny. The Gods of War is every action movie cliché you’ve ever known, carefully caught, collected and pressed between the pages of a book about Earth’s imminent destruction and the prospect of Mars as a lifeboat. There’s something compelling and fatalistic about this book that drags you from word to word and page to page, grimacing all the way because it’s… just… so… bad, but you can’t look away. 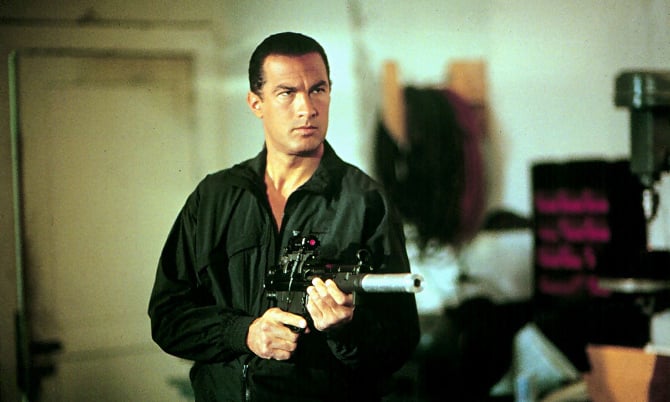 Our hero is James Collins, a square-jawed military type who also happens to be the son of the President of the United World Government. Being a taciturn, casually violent kind of guy, he doesn’t let this go to his head, oh no. He works his way up through the military from the field, goddammit, and refuses any promotion that would result in him sitting behind a desk. The guy is primed to be the hero of something or other so it’s a good thing that the cartoonishly evil Lucien Rex (what a name!), leader of the villainous Cartel and in direct opposition to the idealistic President, is planning something nefarious…

This heady drama is enacted on an Earth that’s dying from all the usual suspects – pollution, overpopulation and war. The many are trampled underfoot and underground in dank poverty, while the mighty, like the Cartel, dwell far above the ground in towers, away from disease and destitution. Geddit? It’s one of those, like, metaphors? Anyway, the plan is to terraform Mars so it can provide the Earth with food, like a great big planetary farm. The treacherous Cartel has another plan in mind though, it wants to nick the entire planet for itself and leave the rest of humanity behind to its doom. Dun-dun-duuhhhh!

Naturally, James gets roped into all these shenanigans whether he likes it or not. That’s right, he’s reluctant. He doesn’t reckon that humanity is worth saving. Hell, he’s not even sure if he’s worth saving. Luckily, here are some secondary characters to help him realise the error of his ways. There’s the plucky subterranean-dwelling doctor with the heart of gold, who gave it all up to help the poor. And look, over there! Is that a comely woman with a modicum of intelligence who’s madly in love with James? I think I know how we can figure it out. Are her physical attributes and attractiveness to the opposite sex discussed before we know anything else about her?

Hannah Ankaris sat in the passenger seat of a huge ten-wheeled vehicle, known as a Deca-Trac, as it trundled across the red surface of Mars. The big machine moved slowly, more like a monstrous caterpillar than an off-road vehicle out on the plains.

Thirty-one years old, with straight black hair, olive skin and green eyes, Hannah was attractive enough to most men, but more stern and standoffish than they seemed to like. She was tough, thick skinned and decisive, traits that made for a better friend than lover.

Well, there you go then! She must be the romantic interest. As an added bonus, she also uses her good looks to beguile villainous characters, cleverly hiding how stern and standoffish she is so they’ll be sure to be attracted to her. What a gal!

The Gods of War occasionally slips from being just horrible to so-bad-it’s-good/comical. But mostly it’s bad. Apart from the clichés and the heavy-handed moralising, this just isn’t good sci-fi. The whole Martian plan isn’t a very good one to start with and the science behind the scenes on the Red Planet isn’t terribly robust. At one point, James trots out into the supposedly killing sun of Mars on a rescue mission with nothing but a “metallic tarp” to cover his head. Not only does he not die, he even manages to sprint for a while.

Traditionally, sci-fi books tend to just throw details at you and expect you to catch up with jargon, scientific concepts and an entirely different world as you go along. In this book, everything is painstakingly spelled out – to the point of actually spelling out that the acronym MRV stands for Mechanised Robotic Vehicle. Aside from the fact that that’s a ridiculous name for huge military robots anyway, you can pretty much figure out what they are from the fact that they’re also described as “giant walking tanks”.

The only possible way to try to enjoy this book is to suspend all common sense, celebrate the clichés and be either drunk or very, very hungover. But if you can manage that, you might have a laugh. ®