Metal BigMog is quiet(ish) and deadly

Vid MIT roboticists in the US have exhibited a robo-cheetah that will run and bound across the landscape without the need for a power cord.

The big cat bot is of particular interest to robotics scientists since it's the fastest quadruped found in nature. The US government's secret-squirrel science nerve-center DARPA (Defense Advanced Research Projects Agency) has been splurging funds trying to find someone to build a robo-cheetah.

Boston Dynamics – now owned by Google – has its Wildcat machine, capable of bounding across the landscape at about 16 miles per hour, but this requires a petrol engine that's about as stealthy as a high-school marching band.

By contrast, MIT's robot uses a custom-built electric engine, and is totally battery powered. This makes it much quieter, but its range is limited by today's battery technology so it won't be winning any endurance races.

The MIT cheetah is capable of running about 10 miles per hour, and is can bound over 33-centimetre-high obstacles. But the team thinks it can get the speed up to at least 30mph, thanks to an intensive study of how cheetahs reach their exceptional sprint speeds. 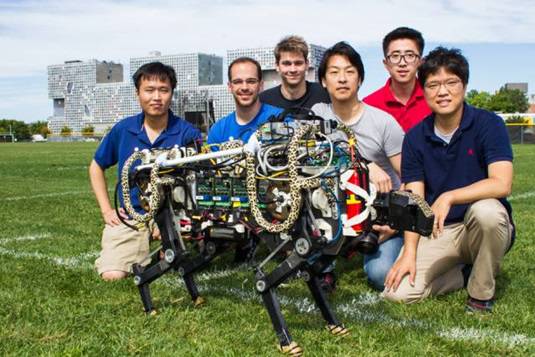 The faux leopard-skin upholstery is an interesting touch

"Many sprinters, like Usain Bolt, don't cycle their legs really fast," said Sangbae Kim, an associate professor of mechanical engineering at MIT. "They actually increase their stride length by pushing downward harder and increasing their ground force, so they can fly more while keeping the same frequency."

The electric muscles on MIT's cheetah produce these forces in the same way, allowing the metal beast to control its speed, and leaping ability. It's the first stage to building a machine capable of fast reconnaissance or maybe a game of cat and mouse with a human target.

"Most robots are sluggish and heavy, and thus they cannot control force in high-speed situations," Kim said. "That's what makes the MIT cheetah so special: You can actually control the force profile for a very short period of time, followed by a hefty impact with the ground, which makes it more stable, agile, and dynamic."

Judging from the video filmed by MIT, the cheetah's not going to be chasing anyone down yet, since it appears to have significant problems turning. But the work at the US university, and at Boston Dynamics, shows the time will come when robot quadrupeds stalk the streets. ®

Get a feel for the gizmo's programming environment