4Gb/s speeds on a consumer drive, anyone?

Review Samsung has been in the SSD business for over ten years. Most of that time has been spent delivering drives to the Enterprise and OEM segments. Since the introduction of its first consumer SSD drive (the SSD430) in 2010, it has since shipped over 12m drives worldwide – including the SSD840, the world’s first TLC NAND drive. 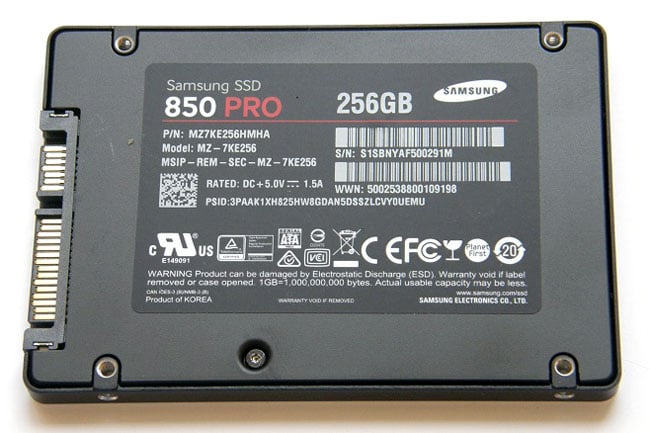 Samsung has some clout, that's for sure and with the latest consumer drive range, the SSD850 PRO, it has another first: the world’s first consumer drive to use 3D V-NAND, in this case the 32-layer version of the technology.

Lest we forget just how fast NAND memory cell structure has developed: in just 15 years it has gone from a 120nm process down to a 16nm process. At the same time, capacity has grown a hundred fold.

That said, the standard 2D Planar NAND technology is fast approaching the buffers, as far as die shrinkage is concerned. This is why most of the major players in the NAND game have designs in one form or another for the next major leap in NAND development – 3D NAND.

It comes as no real surprise to find that Samsung is the first to market drives using the new NAND. Its take on the idea is what the company calls 3D V-NAND, or to give it its correct title, 3D Vertical NAND. The clue of why this NAND is so special is in the name.

3D V-NAND has the flash cells stacked on top of each other and alongside each other, hence the three dimensions reference. The vertical stacking being the most significant factor that is able to offer 100 times the capacity of standard 2D Planar NAND in only 1/10th of the same area. It's this type of technology that opens the doors for the only real remaining holy grail of SSDs; much larger capacity drives.

The new technology negates the constraints that manufacturers of standard NAND come up against as they constantly try to shrink 2D Planar NAND down to ever smaller die sizes to get ever denser cells, in particular cell-to-cell interference and patterning.

Cell-to-cell interference occurs when an electric charge flows into one cell, causing a similar charge to flow into a neighbouring cell (the coupling effect). When this happens the data in the neighbouring cell gets corrupted. This interference isn’t a problem when the space between cells is greater than 30nm but as dies shrink smaller and smaller, so the risk of interference grows.

The problem with patterning is that it is limited within the 10nm process but it’s a vital technology for 2D Planar NAND, as it allows for greater density through the photolithography process.