First Fondle If the big queues for the iPhone 6 and iPhone 6 Plus at the Broadway Apple Store in Sydney, Australia are a reliable augury, mighty Apple is back on top form, el Reg can report.

Thanks to a timezone advantage, Aussie Apple outlets open earlier than any others on the planet. The Register dropped in for the iPhone 5 and iPhone 5s/c launches. And so we did the same for the new 6.

This year's queue was considerably longer than those for the aforementioned two launches, snaking out of the mall where the Apple Store resides and down several tiers of the carpark access ramp: the line stretched at least 200 metres. Halfway along, people said they had arrived at 0300, and had the apparel to match: Sydney's overnight temperatures dropped to 9.2°C. 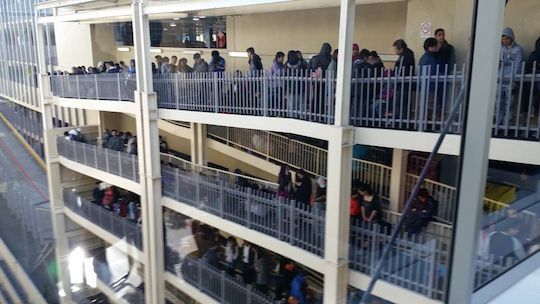 Fanbois on a slippery slope: Apple Store staff worked the queue on the lower tiers dampening expectations of a successful sale

A few other differences at this year's launch included:

That last point meant your correspondent, even as a member of the press, was unable to get his hands on the iPhone 6 in the Apple Store. Happily, a level below Apple is a shop for Australian telco Optus, where the manager checked with his boss and quickly ushered us in for a play.

First impressions? The 4.7-inch iPhone 6 is a top-tier premium smartphone.

The iOS 8 user interface changes little on either of the new devices, but the iPhone 6 Plus tweaks the Home Screen by moving the four persistent icons along the bottom in portrait mode into a vertical bar down the side in landscape mode when you rotate the phone. Doing so makes a lot of sense, but doesn't help with one-handed operations: the 5.5in Plus phablet is not a device anyone but the Brobdingnagian will be able to wield in a single paw.

The iPhone 6 will also challenge those with delicate hands: even though it is a little smaller than the Galaxy S5, it is not easy to wrap a hand around.

Both are, in your correspondent's opinion, far lovelier objects than the boxy iPhone 4 and the severe iPhone 5. The iPhone 6 is slimmer than the Galaxy S5, is made of more pleasingly-grippy materials, and is rather prettier besides.

The 6 Plus phablet feels like a more coherent design than Galaxy Tabs, and its aesthetics match those of the Nokia Lumia 1520, but in a rather slimmer package.

Audio disappointed in both models: we got muddy bass and some odd flittering at the top end from the internal speakers. Both screens sparkled, perhaps as a screen can only do when connected to an external power source and before a million fingerprints besmirch it.

Your correspondent moved from the iPhone to Android a couple of years back, but, having beheld the iPhone 6, is mighty tempted to make the return journey. The new models appear not just to be updated iPhones, but handsets capable of going toe to toe with any other.

That many of the new iOS features bring Apple to parity with Android must be acknowledged, but Apple has again pulled off the trick of producing an object that is delightful to behold, to hold, and to use. ®

* Police across Australia yesterday conducted raids on terror suspects, alleging a plot to pull a random citizen from the streets, murder them by beheading and video record the results. A followup operation involves conspicuous officer presence at public gatherings where tempers may flare or a bit of extra protection is needed. The Reg doesn't know if iPhone launches are considered worthy of such treatment, but if they are it probably says something about something. Or something.