THE DEATH OF ECONOMICS: Aircraft design vs flat-lining financial models

Fags and booze to the rescue

Crawling from the Wreckage John Watkinson continues his series of essays for El Reg in which he examines failures in society from banking and education to transport and IT. Here, with a critical eye on our economic plight, he looks at the methods employed by those doing the sums and their consequences.

Here we are, several years into the aftermath of the latest and greatest economic crash. They occur with near regularity; just irregular enough to be unpredictable. In any discipline, catastrophes are studied and changes are made to eliminate them. There are complex systems behind the water that comes out of my tap and the electricity that comes from the wall socket, others stop airliners and trains bumping into each other and by and large they work. The conclusion must be that economics is not a discipline.

Any half decent audio amplifier uses negative feedback so that if the output deviates from what it should be, the input is tweaked in such a way that brings it back. Have you ever wondered why the engines on an airliner are set forward of the wings? Well, if the wing is flexed upwards by a gust, the mass of the engine resists upward movement and the effect is to twist the wing down, so that it flies itself back to the undisturbed position.

Imagine what would happen if the engine were behind the wing. The mass of the engine would amplify the effect of a gust and the wing might tear itself off. This is called divergence or positive feedback. Moreover, the wing might twist to an extreme angle and stall, so it would then twist alternate ways in a phenomenon called flutter. How ironic that flutter is also a term for gambling.

When a crisis goes on for seven years it is no longer a crisis and becomes the new normal. Economists think that they have control of economies using interest rates, but they don’t. Interest rates have been at an all time record low for years now and nothing is happening. In servo parlance, the system has gone hard over. The input isn’t controlling the output.

Economies are more complex than was thought. I believe it is axiomatic that, as economists are unable to prevent the instability, they either don’t have a model of how economies work and/or they don’t have control. When the wings have come off, applying up-elevator is pointless. All Draghi but no lift. In that sense, it doesn’t matter who wins the next election. When the wings have come off, the pilot’s intentions don’t mean a lot. 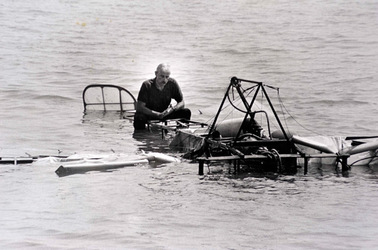 Unstable systems are self-crashing. The divergent behaviour can be triggered by any small random disturbance. So blaming an individual disturbance is foolish. If it had not been that disturbance, it would have been another one.

So-called toxic loans and sub-prime mortgages are widely blamed for the latest crash. A sub-prime mortgage is one where there is some risk that the mortgagee may not be able to pay regularly. Someone like that must be a loser, so it’s plausible to blame them. But it’s a fanciful presumption and the blame lies elsewhere.

I went to buy a candy bar in Palm Springs airport and came away with Charlie LeDuff’s Detroit: an American Autopsy. I recommend this book to anyone interested in mending our broken society. Among the chilling stories of a broken city, one stood out, and that was the story of the negative amortisation mortgage.

I have said before that it is the mission of banks to cause debt. In a negative amortisation mortgage, the monthly repayments are incredibly low, so, superficially, it’s attractive. But the repayments don’t even cover the interest, even though in some cases the mortgagee thought the loan simply had a low interest rate. What happens is that every month the amount you owe goes up: banking heaven.

You end up in a house that you can’t afford, that you will never own, owing more every month, until the amount you owe crosses a threshold and then there is a massive jump in the repayments. That might work if the value of the house had risen, or if your salary had gone up, but it’s a gamble; a gamble in the Las Vegas sense, where you can’t beat the house. In a stagnant economy where salaries are not rising or your employer has just gone turtle, the outcome of a negative amortisation mortgage isn’t a gamble, it’s a certainty.