NASA's MAVEN spacecraft has reached Mars after a 10-month journey – and started its mission to study the Red Planet's upper atmosphere.

The Mars Atmosphere and Volatile Evolution (MAVEN) dropped into orbit around Earth’s favourite neighbour around 3.24am BST after months of journeying through space. To do it, the craft had to point its main engines in the direction of its travel and fire them for around 33 minutes in order to capture the orbit.

“NASA has a long history of scientific discovery at Mars and the safe arrival of MAVEN opens another chapter,” said John Grunsfeld, astronaut and associate administrator of the NASA Science Mission Directorate.

“MAVEN will complement NASA’s other Martian robotic explorers - and those of our partners around the globe - to answer some fundamental questions about Mars and life beyond Earth.”

MAVEN’s mission is to figure out the history of the planet and how its climate evolved over time, in yet another scientific angle on the potential habitability of Mars. The results will also help NASA plot future manned missions to the Red Planet, currently planned for the 2030s. 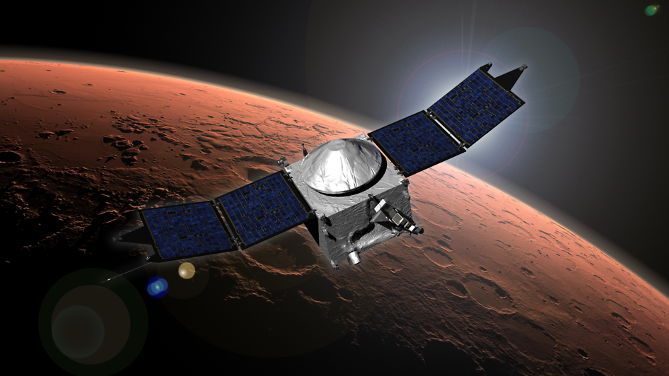 Both Lockheed Martin’s operations centre in Colorado and NASA’s Jet Propulsion Lab in California received the data that started the whooping and clapping of a successful orbital entry from the Deep Space Network antenna station in Canberra, Australia.

Although they had direct line of sight of the satellite during the entire burn sequence, the data came in 12 minutes after the fact, because of the distance between Earth and Mars.

The craft isn’t quite ready to start work yet though. MAVEN needs to run a six-week commissioning phase that will manoeuvre it into its final science orbit and test its instruments and commands. Once that’s sorted, the satellite will aim to complete a one-Earth-year primary mission taking measurements of the composition, structure and escape of gases in Mars’ upper atmosphere, as well as its interaction with the Sun and solar winds.

“This was a very big day for MAVEN,” said David Mitchell, MAVEN project manager. “We’re very excited to join the constellation of spacecraft in orbit at Mars and on the surface of the Red Planet. The commissioning phase will keep the operations team busy for the next six weeks, and then we’ll begin, at last, the science phase of the mission.”

MAVEN cost almost $700m to get off the ground and scientists are hoping that its data will help them figure out how Mars went from being a warm, wet world to the current cold and barren dried-out planet. The craft was the tenth US mission to head for Martian orbit, but only the seventh to make it. ®