Moon landing was real and WE CAN PROVE IT, says Nvidia

Different angle on a product demo

It's only a product promo, but it's a smart one: Nvidia reckons the judicious application of its graphics technology can debunk one of the world's favourite “moon landing was a hoax conspiracies”.

As a demo of the VXGI – voxel based global illumination – technology included in the company's new Maxwell graphics architecture, a few enthusiasts at the company put together a rendered reconstruction of a scene that conspiracists say “prove” the landing was a hoax.

The theory is that the photo below has too much light on Buzz Aldrin, since the sun was behind the mission's lunar module. QED, they claim, Aldrin was lit by some other light source, proof positive that the whole thing was shot in a studio.

VXGI, the company explains, breaks the geometry of a scene into 3D voxels, each of which is analysed for opacity and emittance, letting the system work out how light bounces around in a scene. Maxwell is designed to accelerate that kind of compute-intensive operation. 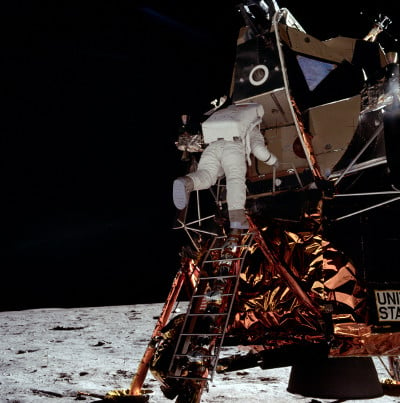 For the moon lander analysis, the researchers looked over the original footage and noticed the reflection from Neil Armstrong's space-suit, showing up as a bright spot of light that moved with the camera. Putting the characteristics of the space-suit into their analysis the researchers were able to reproduce the conditions they say led to Aldrin being so apparently-anomalously well-illuminated in the photo.

There's one more detail they dealt with on the way: the lack of stars, which the conspiracists say should show up in images from the moon (something extensively discussed and debunked in terms of picking an exposure that would show Aldrin without flaring out the whole scene).

Mark Daly, leader of the demo team, says the stars aren't absent, they're just not visible to the naked eye. “But they’re there. And our demo team was able to find them by digitally changing the exposure on the shots to reveal them.”

Nvidia's video is below. ®