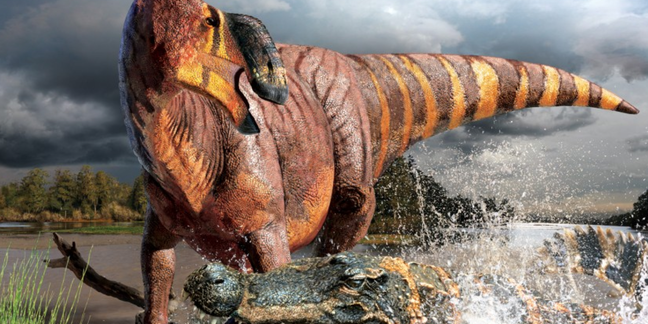 Boffins have discovered a dinosaur with one of the biggest noses ever seen in the animal kingdom, which it was thought to flash around in a bid to impress the ladies.

The researchers who found the big-hootered dino decided to call it Rhinorex condrupus, which literally means "King Nose".

Terry Gates, a joint post-doctoral researcher at the North Carolina Museum of Natural Sciences, and his chum Rodney Scheetz from the Brigham Young Museum of Paleontology, were rooting through the Brigham archives when they came across the skull of a a hadrosaur with a massive conk.

After spending almost two years digging the skull out of the sandstone it was encased in, they quickly realised this was a species which had not been previously identified, before asking themselves why on earth the beast had such a majestic hooter.

“The purpose of such a big nose is still a mystery," Gates said.

"If this dinosaur is anything like its relatives then it likely did not have a super sense of smell; but maybe the nose was used as a means of attracting mates, recognizing members of its species, or even as a large attachment for a plant-smashing beak. We are already sniffing out answers to these questions.”

Based on the bones, Gates estimates that Rhinorex was about 30 feet long and weighed over 8,500 lbs. It was thought to have lived in a swampy and grim environment about 50 miles from the coast.

“We’ve found other hadrosaurs from the same time period but they were located about 200 miles farther south that are adapted to a different environment,” Gates says. “This discovery gives us a geographic snapshot of the Cretaceous, and helps us place contemporary species in their correct time and place. Rhinorex also helps us further fill in the hadrosaur family tree.” ®

Linus Torvalds outs himself as US citizen

Stranger in a strange land

The DIY spy-in-the-sky: From kites to octocopters

A beginner's guide to aerial surveillance

Flash the cash for faster database and HPC cache