Lucky astronomers have peered through the clear skies of tiny, faraway exoplanet HAT-P-11b – and detected signs of water vapour. 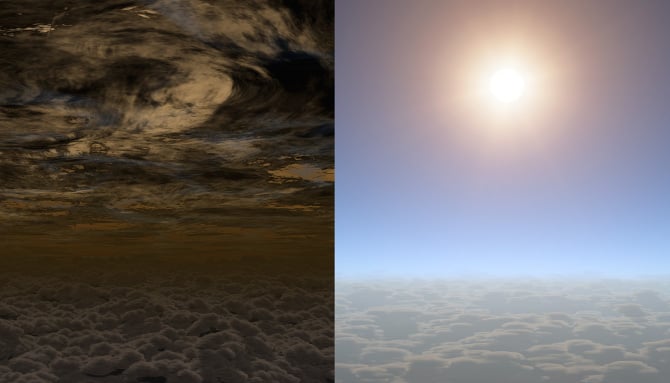 The Neptune-sized world was seen through Hubble, Spitzer and Kepler space telescopes, and its clear upper atmosphere has allowed researchers to see down into the planet’s composition and history.

Often, cloudy skies stop boffins from being able to detect the molecular make-up of the lower regions of an atmosphere, which can give them important information about what the world is like.

"When astronomers go observing at night with telescopes, they say 'clear skies' to mean good luck," said Jonathan Fraine of the University of Maryland, lead author of the study. "In this case, we found clear skies on a distant planet. That's lucky for us because it means clouds didn't block our view of water molecules."

HAT-P-11b is 120 light years from Earth in the constellation of Cygnus and although it’s around the same size as Neptune, it’s orbiting a lot closer to its host star, giving it a year of just five Earth days. The rather warm world is believed to have a rocky core covered by a mantle of fluid and ice and a thick gaseous atmosphere.

The challenge with trying to figure things out about small worlds like these is their size. Jupiter-like planets give up their secrets much more easily because they are simpler to observe and boffins have found water vapour on a number of these exoplanets. Before now, all of the smaller ones scientists have tried to observe have appeared to be cloudy, but HAT-P-11b was the exception.

"We set out to look at the atmosphere of HAT-P-11b without knowing if its weather would be cloudy or not," said Nikku Madhusudhan, from the University of Cambridge. "By using transmission spectroscopy, we could use Hubble to detect water vapour in the planet. This told us that the planet didn't have thick clouds blocking the view and is a very hopeful sign that we can find and analyse more cloudless, smaller, planets in the future. It is ground-breaking!"

After the astroboffins first spotted water vapour on the meteorologically favourable planet, they used data from Kepler and Spitzer to confirm their observations and make sure they weren’t actually seeing cool starspots – freckles on the face of stars – instead of water.

The three ‘scopes reckon the world is blanketed in water vapour, hydrogen gas and other as-yet-unidentified molecules.

The boffins hope to find out more about other exo-Neptunes and use the same method to figure out if there’s water on smaller super-Earths. Honing the method should help astronomers to pick out in advance the planets with atmospheres clear enough for molecules to be detected. ®