A Norsified Linux for Windows and OS X wobblers

Review First things first: the name. The next Elementary OS was codenamed Isis – as in the Egyptian goddess of magic and life.

That was until Islamic State became a thing and the distro’s team decided such associations were unwanted. Now it’s Freya, as in the Norse goddess of love and, er, war.

Conflict aside, what a nice update to last year's Luna release of Elementary Freya is shaping up to be. The Norsified Elementary builds on Ubuntu 14.04, though, as always, the Elementary developers pick and choose when it comes to the distro's base tools.

You'll find all the updated hardware support in Ubuntu 14.04, but Elementary replaces GTK 3.10 with the more cutting edge GTK 3.12, which gets Elementary a nice combined window bar/title bar that saves a bit of space and looks great with the rest of Elementary's very polished desktop theme.

You'd be forgiven for thinking Elementary is based on GNOME Shell. It looks a bit like GNOME Shell, with a clock in the middle of the top bar, an Applications menu to the left and some indicator apps to the right. In Luna the top bar was black by default, which made it look even more like GNOME Shell.

But Elementary is not based on GNOME Shell at all – although it is more like what GNOME Shell should be. Elementary has its own desktop, Pantheon, as well as half a dozen or more other homegrown components - the Slingshot launcher, WingPanel (the top bar) and Plank (the bottom dock/panel), to name a few. 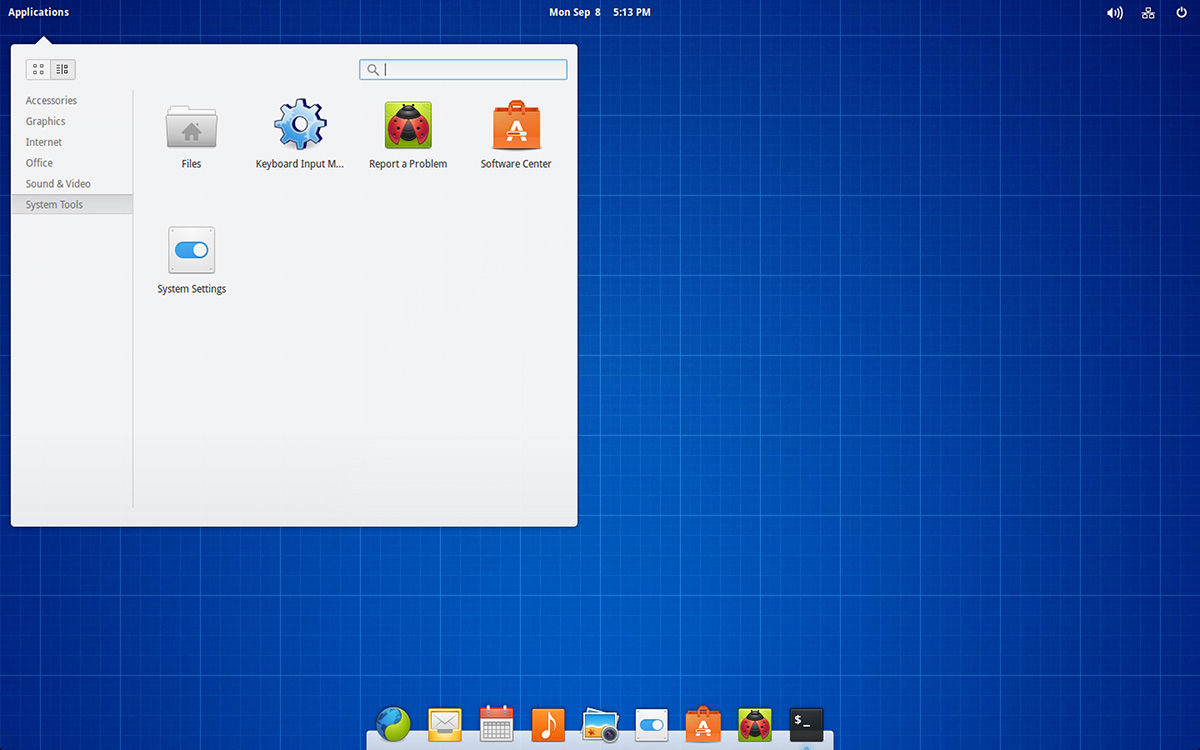 Is that a GNOME shell I see before me? No, it's Pantheon (click to enlarge)

These tightly integrated desktop tools make Elementary one of the best looking, easiest-to-use Linux desktops around. That said, it’s not easiest to customise, so if you enjoy customising your desktop, XFCE and similar will be a better fit. But if you're looking for a great, user-friendly desktop with plenty of polish, Elementary delivers.

This first Freya beta sees Elementary polishing up its already very slick theme with some new tools. For example, the top panel is now smart enough to adjust its opacity based on the desktop image behind it. Lighter images will cause the bar to darken so the white text and icons remains visible on the light background.

It's a small thing, but shows the level of polish the Elementary developers are aiming for. Which is not to say everything in this release is perfect. There's still no minimise button by default. There's an older PPA for a "tweak" tool, but I didn't test it with this release and I suspect, given the changes to the UI, it will require an update.

You can of course, right click on a title bar and minimise windows that way, but the absence of a minimise button mars what I would otherwise consider perhaps the most new-user-friendly Linux desktop available right now.

On the plus side, Elementary continues to have great keyboard-drive navigation options. It's not Xmonad by any means, but there are plenty of keyboard shortcuts to keep the mouse-haters happy. Head to System Settings, Keyboard, to see a list of everything available by default.

Freya sees Elementary jumping on the online accounts bandwagon with a new option to the System Settings app. This is one place the beta nature of this release shows. I was very excited to see that Fastmail was one of the default account types, regrettably I could not get it to work. In fact the only syncing options that worked in the version I tested was the Google account sync.

Once the new online accounts feature is finished it should be a great way to keep track of all your various stuff that's scattered around the web. Similar features are available in GNOME and Unity as well so its not like Elementary is breaking new ground here, but still nice to have it integrated into Freya.

Perhaps the most disorienting thing about Elementary for those of you accustomed to other desktops is that almost all the default apps are homegrown, Elementary-backed applications. In other distros this would likely mean you end up with a bunch of unstable, half-baked apps, but Elementary actually pulls this off with some very nice apps that cover the basic user's needs. 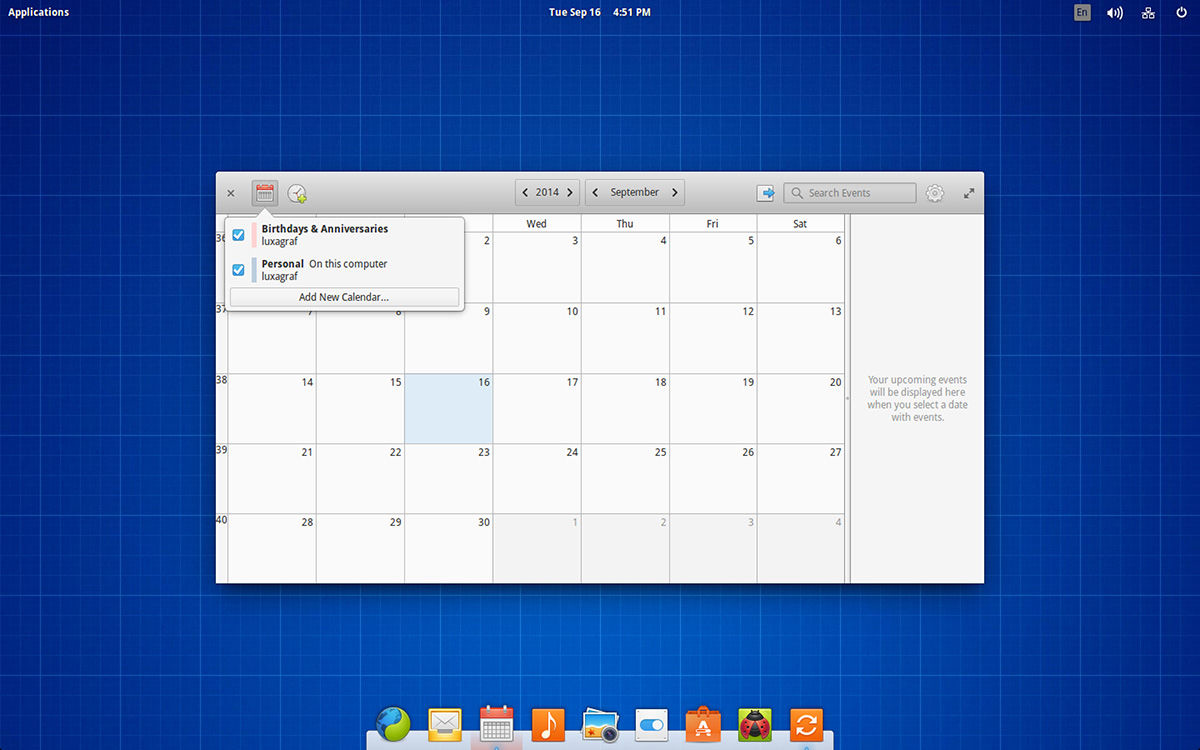 The best desktop calendar for Linux? Possibly (click to enlarge)

There's a music player, a very nice email app, perhaps the best desktop calendar app you'll find for Linux, a photo organiser and a decent text editor. None of these will likely replace your favourites if you're already heavily invested. For example, the Photos app is no digiKam, but it does offer most of the basic tools you need for organising and making small edits to your photos. Likewise the text editor isn't going to win over Emacs users, but it works well for the general use case.

So far in the Freya release cycle, none of the stock apps have seen major visual updates, though in many cases the setup is easier now thanks to the unified online account tools mentioned earlier.

The other good news for Elementary fans is that this release somehow manages to have even more visual effects and transitions, yet performs better than Luna in my testing.

Freya is fast, so fast you might walk away wondering why GNOME 3 and Unity, which both have much bigger development teams, aren't this fast. Even on my EeePC it's nearly as fast as the stripped down version of Debian/Openbox that I normally use. Suffice to say that if you're looking for great performance that doesn't sacrifice great user interface design to get it, Elementary makes a good choice.

The only catch to Freya thus far is it's the first beta. Elementary often has long beta cycles (Luna, was in beta for well over a year).

Still, Freya, and the stable Luna are my top picks these days for Linux newcomers. I’m looking at you, Windows and OS X people. ®