Page File El Reg bookworm Mark Diston reviews the latest rivetting reads. David Mitchell, no not that one, beguiles with yet another world of magic and mystery, while Jem Roberts tries not to panic as he explores the life and works of Douglas Adams. Ever wondered where the stranger ideas of American music came from? S. Andrew Granade says we owe a lot to just one man.

“A book can’t be half fantasy any more than a woman can be half pregnant“ ... so speaks Crispin Hershey, a fictional author in David Mitchell’s The Bone Clocks. It appears that this book may be the exception to that rule.

The Bone Clocks centres around the life of Holly Sykes, who is fifteen years old at its outset and whose "life is about to be turned upside down". In a matter of hours she leaves home and then discovers her boyfriend in bed with her best friend (“My heart’s a clubbed baby seal”)

Then shortly afterwards she meets a strange old lady who offers her green tea and in return asks for “asylum”. Holly agrees, not knowing quite what she means. Subsequently a series of bizarre events begin to take place, some of which Holly can remember, others she cannot.

We are introduced to the supporting cast: an Oxbridge cad, Hugo Lamb AKA Marcus Anyder, who shares a one night stand with Holly in Switzerland before being seduced by the powers of darkness. Then there is Crispin Hershey, the aforementioned novelist who seems to represent the worst aspects of the UK literary scene. We meet Hershey as he bitches and feuds around the world’s major literary festivals, eventually befriending Holly, who has written a successful memoir of her mystical experiences. 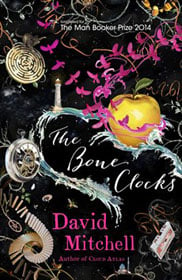 Holly’s partner is a childhood friend who becomes a foreign correspondent in Iraq. One of the most effective sections of the book cuts together a family wedding in Brighton in 2004 with scenes from Fallujah and Baghdad. Holly’s partner imagines Blair talking to himself in the mirror: “Oh fuck Tony, Iraq has gone well and truly titsup, why oh why did you ever listen to George?” The rest of the UK would surely love to hear the answer.

The action takes place on a worldwide scale. There are many diversions into the lives of supporting characters, but unlike, for instance, Will Self’s Shark, which I reviewed recently, they are superbly written and always entertaining.

Our heroine is drawn into an epic struggle between the Horologists and the Anchorites, a traditional struggle of good versus evil. The final battle is probably one of the least impressive sections of a book, whose main strengths are its thorough grounding in reality. Indeed, by the time things start getting really weird and mystic, there is in place a solid framework which makes the “fantasy” episodes more effective and believable.

The final section of the book takes place in a post-apocalyptic west of Ireland underneath: “Clouds like sheep’s wool caught in barbed wire”. As Holly’s tale draws to a close, events unfold offering hope for future generations.

This is an epic novel in every sense, the nearest writer I can compare David Mitchell to is probably Neal Stephenson, with whom he shares a similar wide screen sensibility, but Mitchell is a lot less sci-fi and a much better character writer.

An absolute gem of a book, The Bone Clocks is a joy to read and I couldn’t recommend it more highly. While others might be familiar with Cloud Atlas and its cinematic interpretation, for me The Bone Clocks is the first work by David Mitchell that I have read and it just made me want to wade through the rest.

Epileptics, be warned. Flashy GIF coming up on page two.

Next page: The Frood, The Authorised and Very Official History Of Douglas Adams and The Hitchhiker’s Guide To The Galaxy
Page: