Review The Inateck BP2001 is a 2 x 5W Bluetooth enabled portable stereo speaker. It's reasonably stylish in design, easy to use, has a slot on top where your mobile device sits and charges via standard micro-USB. It's a reasonably good catch at £50, although the Inateck website will direct you to Amazon where you can buy it for under £30. 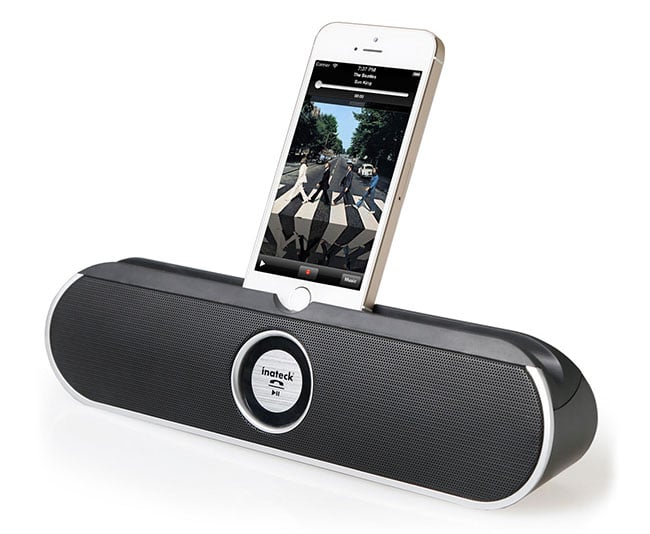 Inateck BP2001 portable Bluetooth speaker: no it's not a docking port, it just sits in the groove along the top

When asked to review a Bluetooth speaker, I was a little buggaloed at the idea. It's a speaker. How does one review it?

When you spend your days and months reviewing complicated enterprise-class storage, networking and virtualisation gear, it's easy to forget the simple pleasure of consumer goods. Bleeding edge Silicon Valley startups can be so depressing; it's an uphill battle to make half that stuff work as intended.

Even when it does work as intended, "it just works" is not how I'd describe the output of most startups. "Works as intended" usually still involved some complicated bit of scripting, or entering arcane commands. It could have – or not have – a usable user interface. In that world, you never really know. 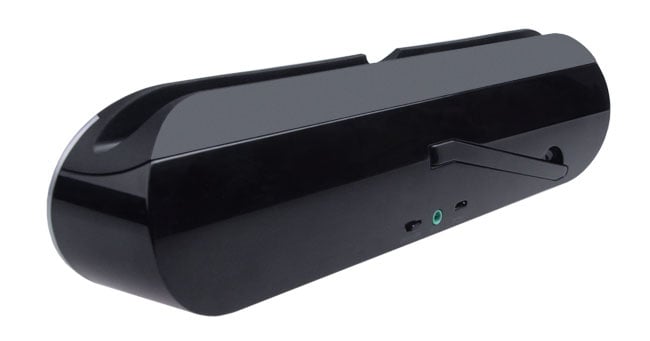 There's an Aux input at the back for old school connectivity

To contrast, the BP2001 has a power switch on the back, and a giant button on the front. Push and hold the giant button until it makes a noise. On your smartphone/tablet/notebook/whatever go into your Bluetooth setup screen, select "BP2001" and give it about 30 seconds. The speaker will make a bizarre little chirp and you're done.

The answer to "how do you review a speaker", of course, is "you listen to it". Here is where "the ear of the beholder" becomes very important. Josh Folland and I both gave it a whirl and came up with very different views.

But just for the record, as reviewing goes, this sonic baguette measures up at 240 x 62 x41mm and weighs 332g. It utilises Bluetooth V2.1+EDR and has a range of around 10 metres. For those without Bluetooth, you can plumb in an iPod or similar into the 3.5mm aux jack at the back where there's also a handy prop stand and the micro USB charge port.

Now back to the ears and graces. To understand Josh's perspective you need to understand a little about Josh's tastes. Josh is a connoisseur of only the finest metal bands. He claims to be able to hear things that I obviously cannot, and I have hearing keen enough to be able to hear individual rail cars being undocked at the rail yard 4km away, through the heart of the city. 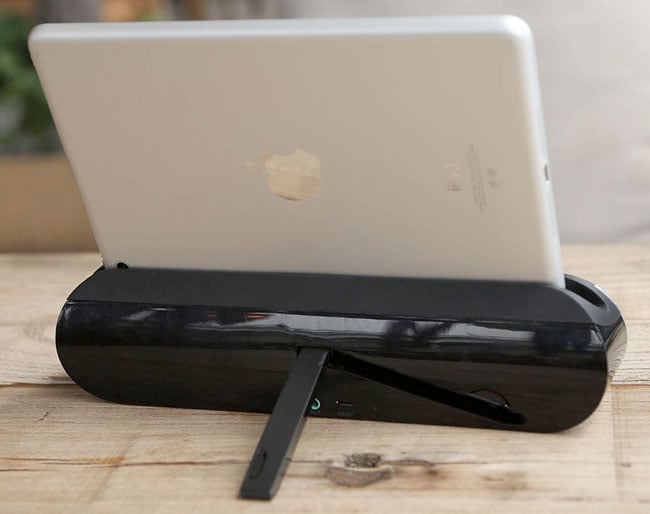 If you've heavier devices in the top slot, the prop stand adds stability

If you present me with Josh's music, it sounds like someone has passed the output of the Arecibo radio telescope through a MIDI synthesizer at high speed and overlaid it with the vocal stylings of a very angry man simultaneously gargling and being strangled. Josh claims it is a symphony of complexity too vast for my mind to comprehend.

When Josh loads up his mixture of audio diversity on the BP2001, he frowns. "The low end is distorted," he mutters. I, meanwhile, am wondering if the occupant of the hotel rooms adjacent to ours are going to crawl through the wall and demand to know why we are torturing some poor man with what sounds to me like near-infrasonic staccato jackhammers and a pack of Jurassic Park velociraptors.