Windows NEIN skipped, tech preview due out on Wednesday

Vid+Pics Microsoft has shown off Windows 10, and described it as a blend of Windows 7 and 8.

Redmond thinks the new operating system is so revolutionary, it skipped over version 9 and went straight to double digits.

"We will carry forward all that is good in Windows," Terry Myerson, executive vice president of the operating systems group, told a press conference in San Francisco, shortly after 0930 PDT (1630 UTC) on Tuesday.

"Because we’re not building an incremental product, the new name will be Windows 10," he said, joking that they'd thought about resetting to Windows One, but Bill Gates got there first in more than two decades ago.

The very early build shown off by Myerson, and Joe Belfiore, corporate vice president of the OS group, is going to be a single operating system that will run on everything from the largest screens – 80 inches in size – right down to embedded devices such as life-support systems. That's the dream, anyway.

As for hardware support, the OS will run on "the vast majority of Windows systems out there," Myerson promised, although he acknowledged that phones may be a trickier proposition than PCs and tablets. The release date will be after the Build developer conference due sometime next spring, but on October 1 a "technical preview" for x86 machines will be opened up for all.

Developers will be able to build applications that are "write once and run on any Windows 10 platform", a mantra we first heard in the early days of the Metro interface's introduction – when Win 8 software was supposed to comfortably run across desktops, touchscreen tablets and pocket-sized phones.

From Wednesday, Microsoft will start a Windows Insider Program, where tech-savvy users can get very early code, comment on it, and discuss changes that are needed in forums.

"Our intentions are quite simple. We believe that together, with the feedback you provide us, we can build a product that all of our customers will love. Windows 10 will be our most open, collaborative OS project ever."

Probably the key reason why enterprises shunned Windows 8 is that the interface is too different, and their IT departments are being deluged with calls from frustrated users. With Windows 10, Microsoft is seeking to build a user interface that even basic Windows users will recognize, but which rewards the savvier operator.

Windows 10 is going to be instantly recognizable to Windows 7 users based on the early build shown off on Tuesday. There's the same task bar on the bottom of the screen with a Start button, but when you click on that the Windows 8 input becomes apparent.

As well as having installed programs listed in the Start menu (the size of which can be customized), there's also a selection of Metro-ish tiles that can be used to launch software. Microsoft promised that almost all current Windows applications will be supported by the new operating system.

There will be a task bar so that users can flip between pages and browsers seamlessly and quit out of unwanted programs, similar to Apple's OS X Expose or Android's app viewing system. Features like the "snap to fit" application windows in version 7 have been added to allow apps to get the maximum available area without overlapping. 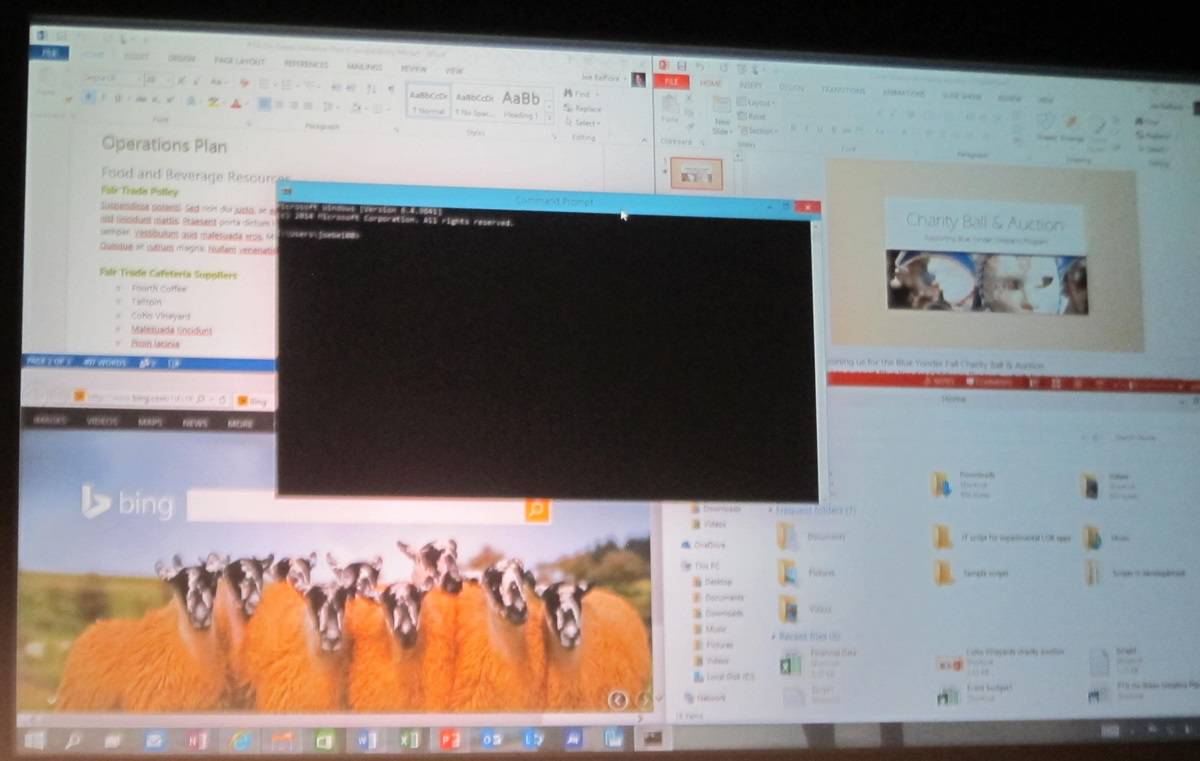 All the old keyboard shortcuts will still work, Microsoft said, again in a nod to the mouse and keyboard users who still make up the vast majority of Windows users. But Microsoft has also improved the command-line interface for power users hoping to get deep into the operating system, Belfiore promised.

The new UI for Windows 10. A mix of old and new that has some nifty customization features. pic.twitter.com/5p9DIO0zOA