Tooth embedded in thigh bone may tell who pulled the trigger

Top brainboxes using advanced technology say they may have found a "smoking gun" in the form of a bite mark inflicted during a long-ago battle between a mighty dinosaur and another giant reptile. 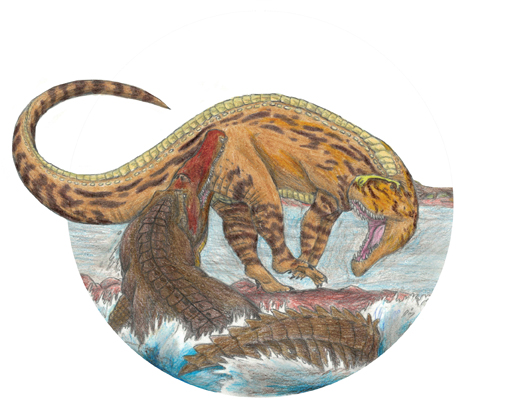 The bite mark in question dates from the late Triassic era, and was found in a rare fossil which includes a piece of phytosaur tooth snapped off in a leg bone from a 25-foot-long proto-crocodile rauisuchid. The phytosaur, another hefty croc-like beast, lived partly in the water and will probably have been smaller than the land-based rauisuchid.

"Finding teeth embedded directly in fossil bone is very, very rare," says top bone boffin Stephanie Drumheller. "This is the first time it's been identified among phytosaurs, and it gives us a smoking gun for interpreting this set of bite marks."

According to Drumheller and her colleagues, the ancient bite mark shows that the mighty rauisuchids may have been frequently targeted and eaten by smaller but bolt-hard phytosaurs. It seems that the rauisuchid in question probably survived the original scrap in which the tooth fragment snapped off in its leg, as the bone later healed over. However a later dust-up saw the big fellow overcome and most probably scoffed by his or her smaller assailant(s).

To study the tooth without destroying the bone, the team partnered computed tomographic (CT) data with a 3D printer and printed copies of the tooth. This, along with an examination of the bite marks, revealed a story of multiple struggles. The team found tissue surrounding bite marks illustrating that the rauisuchid was attacked twice and survived. Evidence of crushing, impact, and flesh-stripping but no healing showed the team that the animal later died in another attack.

The discovery is likely to wobble a few applecarts in the world of fossil-furtling, as until now it been assumed that the landgoing reptiles of the Triassic mostly had nothing to do with the watery ones. It's also likely to undermine the notion that the larger beast will win in a fight.

"Both of the femora we examined came from some of the physically largest carnivorous species present at both locations. Yet they were targeted by other members of the region—specifically phytosaurs," comments Drumheller. "Thus, size cannot be the only factor in determining who is at the top of the food chain."

The new fossil study is published in the learned journal Naturwissenschaften. ®