DataDirect Networks has bundled IBM's GPFS parallel file system, which uses GridScaler technology, into its GS7K appliance. The appliance can use its WOS object storage as a huge back-end vault, which DDN hopes will remove GPFS set-up complexity while preserving standardised NAS access.

GPFS systems are known to be powerful but also tricky to set up and operate. Bundling it into an appliance front end, which is simpler to set up and run, while giving it transparent access to a WOS (Web Object Scaler) object store inside a single logical namespace ticks many boxes according to DDN, it being a high-performance (✓), scale-out (✓), parallel file system(✓) easy-to-use appliance (✓). 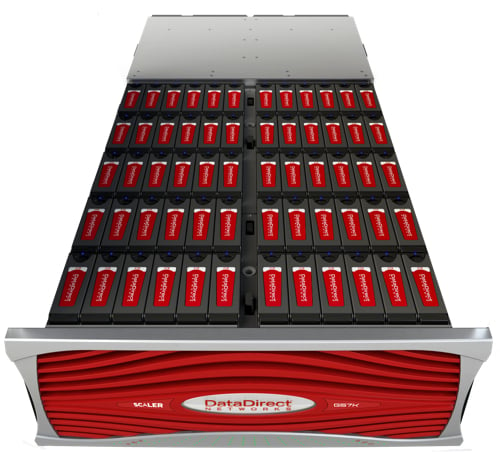 The GS7K has 4U enclosures holding 60 drives with two of these delivering 12GB/sec of bandwidth. Multiple GS7Ks can be clustered over InfiniBand to reach hundreds of GB/sec aggregate bandwidth. In an SFX sub-system, SSDs are used for read caching hot data and accelerating file system performance. Typically the system would be split: with 15-20 per cent flash capacity with the rest being disk, although greater amounts of flash an be used. Both SAS and SATA disk drives can be used, with differing rotation speeds, in the same system.

It can store hundreds of PB of data with hundreds of GB/sec bandwidth and "has enterprise class features for big data, cloud connectivity, data tiering and integrated backup. Scale-out is achieved by adding appliances which come with the necessary processing and storage resources pre-loaded.” Access can be by either a direct connect or via NAS protocols.

DDN doesn't think parallel NFS is popular enough to make it a viable alternative to GPFS, marketing head Molly Rector saying: "We don't see the need at this point. It's possible that we will in the future."

She said the WOS back-end provided cloud-tiering for lower-access rate data, and WOS has both S3 and NFS interfaces. Data can be shipped from the GS7K to a WOS system to enable wider data sharing, or even to tape; it's an HSM (hierarchical storage management) capability.

DDN has integrated the TSM backup product into the GS7K so it can write older data out to tape if needed, seeing a requirement for longer term data storage than would typically be envisaged with WOS. This dual back-end provision, object storage or tape parallels Quantum with its StorNext system sending older data to an Amplidata object store (Lattus) or to tape. The trade-off is well-known: tape is cheaper but object storage faster, except for larger files.

The GS7K features include snapshots and disaster recovery facilities. Management is by the configuration and monitoring DirectMON utility. It will, over time, handle both data and storage system management. Molly Rector said DirectMON would become DDN's software-defined storage offering.

The market background seen by DDN is that enterprises in such areas as oil and gas and financial services need to process larger and larger data sets, using HPC-like applications. These depend up on having fast-enough storage systems that can scale up to hold the fractional exabytes of data needed, with multiple exabytes in the future, and provide fast access to selected subsets from the single vast namespace store, and then tier the data off to slower back-end storage after processing.

These enterprises don't want to acquire the expertise to integrate GPFS or some other parallel file system, preferring to have it pre-integrated and often use their existing filer interfaces to the data. The GS7K should be, DDN hopes, a good fit to these needs, ticking all the boxes. ®