Europe’s mobile phone operators are so worried about the effects of a proposed net neutrality law on their businesses that they appear to have planned to scare politicians out of passing it.

A leaked document from the GSMA, the global mobile phone operators' association, reveals a campaign strategy that plays on people's concerns about identity theft and even child protection.

The document, “Make The Net Work”, seen by The Register, is apparently based on meetings with members’ CTOs held in August. It concludes:

We urgently need to stop this legislation from being passed in its current form.

The legislation in question is the so-called Connected Continent package, which bundles together a popular move to remove roaming charges with new net neutrality rules.

The GSMA document says that the narrative of its campaign should be that the internet works well today because operators are allowed to manage traffic across their networks, but that regulation on net neutrality could stop all that. Streamed movies or videos would become unwatchable, according to the GSMA, buffering would take forever, online games would become slow and unresponsive, Skype calls would be dropped, and operators wouldn’t be able to keep you or your children safe from cyber threats, identity theft or spam.

The campaign, due to launch in September, was quite advanced, with mock-ups of ads already prepared.

“What if the shortest distance takes FOREVER?” reads one advert showing a map taking “forever” to load, while another preys on parents’ fears for their kids safety: “Your kids are so far away and your phone is so far behind”, it reads. 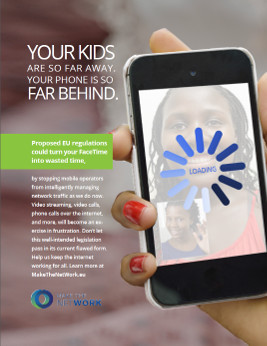 The GSMA declined to comment specifically on the campaign, which does not appear to have been put into action. “At this time, we have nothing more to share on future engagement plans and have no specific comment on the out-dated draft documents circulating from an unknown source,” the organisation said in a statement.

Insiders say that there was some enthusiasm for the plan. “Vodafone in particular wanted to pressure MEPs and national leaders into believing that net neutrality laws would stop action against paedophiles,” one source alleged.

Next page: If every packet is equal, so are paedo packets
Page:
Tips and corrections
20 Comments