XP still clinging on tight, may even be growing a bit

Just when you thought it couldn't get much worse for Microsoft, analysis by Netmarketshare and StatCounter has found Windows 8's market share fell during September 2014.

As we point out each month when reporting the firms' data, their methodology of analysing web traffic is far from perfect. On the other hand, the two firms have been at it for ages, so if nothing else their longitudinal data is revealing.

And here's a nice series of StatCounter data.

What's that you say? You want pictures. Okay: here we go. We've averaged the two sites findings and turned them into a pretty line graph. 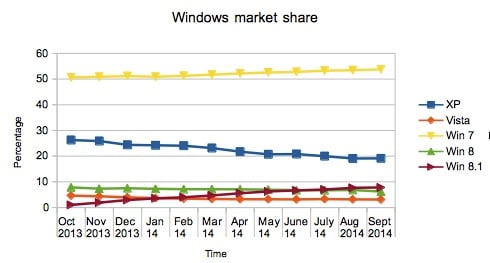 The fall in Windows 8's share looks easy to explain: Redmond doesn't sell much of it any more so it is not like there are many new PCs with the OS coming to market. On the other hand, 8's decline means the overall share of 8.x is now trending downwards.

Moreover, XP's decline has flattened: cheapskates, ignoramuses and the brave clearly feel little incentive to move to another version of Windows.

Linux and Mac enthusiasts: don't get too excited. GlobalStats has Linux up about 0.4 per cent over the last year and Mac OS up a couple of points. That's nice growth for both, but not evidence of a migration trend.