Ice probe peers at hidden BOTTOMS of oceans from SPAAACE

Pics Space is said to be the final frontier, but in fact there is also a penultimate frontier to be finished off before we get out there: the ocean depths, more than 80 per cent of which, until recently, had remained unmapped and unexplored.

Not any more though, because a team of international brainboxes has decided to gaze down from the final frontier (or its doorstep, anyway) and have a proper look at the deep oceans. This was done using the European Space Agency's CryoSat spacecraft, which was actually intended for working out what's happening to the world's ice. However CryoSat doesn't stop working when it isn't over the Antarctic, and the measurements it has taken while above the sea during its four year mission have proved very handy. 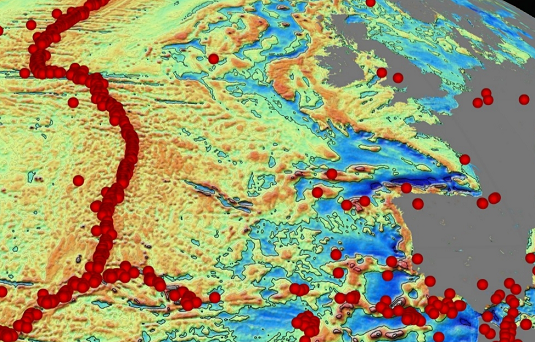 "Although CryoSat-2's primary mission is in the cryosphere, we knew as soon as we selected its orbit that it would be invaluable for marine geodesy, and this work proves the point," says top ESA boffin and CryoSat chief Richard Francis.

Francis and his colleagues used the CryoSat data, combined with other measurements from the Franco-Yanko spacecraft JASON-1, to plot variations in Earth's gravity caused by such features as the underwater mountains known as "seamounts".

"The kinds of things you can see very clearly now are abyssal hills, which are the most common land form on the planet," said David Sandwell, a hefty geophysicist and lead boffin on the new study.

The CryoSat and the JASON, perhaps fortunately for the world's peace, cannot penetrate the gloomy ocean depths with enough precision to pick out nuclear submarines on the prowl. However it seems that the results will be important to the submariners nonetheless.

"The use of satellite altimeter data and Sandwell's improved data processing technique provides improved estimates of marine gravity and bathymetry world-wide, including in remote areas," says Joan Cleveland of the US Office of Naval Research (ONR). "Accurate bathymetry and identifying the location of seamounts are important to safe navigation for the US Navy."

As one might really have guessed, it also seems that the gigantic dataslurp funnels of Google will suck up the new seabed information also. We're told:

The new study is presented in hefty boffinry journal Science. ®