Take THAT, hated food! It's OVER, tedious chewing! Soylent strikes back with version 1.1

Soylent, the venture-funded startup that promises to free humanity from the hated burden of eating, has updated the formula of its mail-order nutrient gloop.

"We have made two changes to the 1.0 formula, resulting in a food with greater neutrality and digestibility (as indicated by preliminary tests)," the company proclaimed in a blog post on Thursday.

What "neutrality" means is that the newly launched Soylent 1.1 – a minor version update – tastes more like nothing than it did before, which believe it or not is one of the stated goals of the powdered food replacement.

If you recall, when an El Reg hack agreed to live off version 1.0 for a week last year, he described its flavor as "a combination of artificial sugars, vanilla, stale chocolate, bananas, and the flavor you get in the back of your throat when you step into a new vehicle with cheap plastic seats."

The new formula promises to tone down the taste, particularly in the sugariness department, with the amount of the artificial sweetener sucralose cut by half.

"Feedback from Soylent 1.0 consumers indicated that many people have been choosing to customize the flavor profile of their individual days of Soylent, and we decided that reducing the baseline level of sweetness would provide greater freedom in choosing flavoring options," the company explained, adding that it's always easier to add sugar than to take it out. 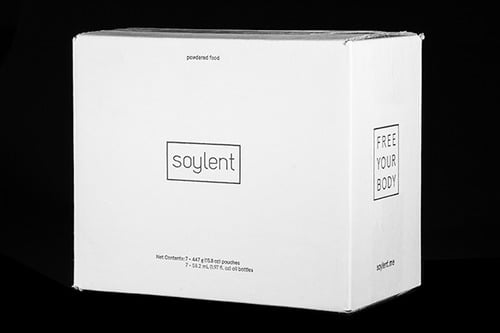 Believe it or not, although a bottle marked Oil Blend does come in this box, the other contents are not sex toys

That brings us to the "digestibility" part.

"Feedback from Soylent 1.0 strongly indicated that due to the differences in individual people's digestive capabilities, action needed to be taken to ensure that the product is easily digested by everyone, without compromising the other benefits that Soylent provides," the company said.

We're not quite sure what they're getting at here, but judging from our man's experience, they may be referring to Soylent 1.0's effect of having him "out-gassing more, and the resultant emissions are noxious."

To combat these effects, the company has added a mixture of digestive enzymes to its brew – including alpha-galactosidase, acid-stable protease, and fungal proteases – which it claims should help guzzlers' bodies break down the complex carbohydrates and proteins in the mix.

"Of course, there are myriad factors which affect a food's digestive characteristics, and it will take several iterations to optimize fully for this category," Soylent says. "We think Soylent 1.1 is a solid first step, and will be relying on feedback from our customers to evaluate the full effectiveness of the enzyme blend."

To commemorate the formula upgrade, Soylent has also issued new packaging for its product. It now comes in an unassuming white box bearing the Soylent logo and the motto "Free Your Body" – your body presumably having been imprisoned by delicious curries and bacon sandwiches for far too long.

The company says that any future orders shipped from its facilities will be fulfilled with the new Soylent 1.1 formula, beginning on Thursday. ®