But Leonardo DiCaprio might not feel the same way 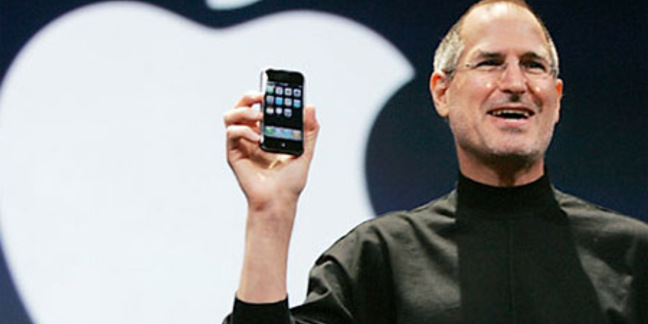 Google supremo Eric Schmidt has claimed that Steve Jobs was his "hero" and said that we should all endeavour to "be a small percentage" of the Apple godhead.

This might sound like he's encouraging time-travel cannibalism, but it's really just a call for everyone to do their bit to change the world.

He doesn't mean properly changing things, obviously, because despite recently being compared to Aristotle, the great Steve was primarily known as a product-peddler rather than some great mind – a fact that seems to have been lost on the fanbois.

Nonetheless, Schmidt thinks Jobs is pretty much the coolest guy that has ever lived.

"We could all aspire to be a small percentage of Steve," he told a meeting of the Commonwealth Club of Silicon Valley.

When asked who his hero was, Schmidt immediately ejaculated: "For me, it's easy: Steve Jobs."

He may like to remember that the fruity führer once planned to launch an iJihad against Google, threatening "holy war" against Mountain View.

Soft-spoken Steve also warned he would unleash a "thermonuclear" can of whoop-ass on Google if they dared to copy Cupertino's designs.

A lot of people probably thought Jobs was less than godly, mainly because he managed to convince the entire world that various bits of consumer technology were as vital to their future well-being as a sensible pension plan.

One of these naysayers might just be the actor Leonardo DiCaprio, who was slated to play Jobs in the squillionth biopic made since Steve was uploaded to the clouds above.

This latest one might actually be watchable because it will be based on Walter Isaacson's best-selling biography and be directed by Danny Boyle, the Brit responsible for cult Scottish junkie film Trainspotting as well as the opening ceremony of the London Olympics.

Unfortunately, the five-time Oscar nominee (he has never won) has dropped out of the running to play the great Steve.

So who would you like to see play Steve Jobs? This writer would like to see Mr T take on the role. Having seen a glimpse of the working environment, we pity the fool who works at Apple. ®