None of this episode made an ounce of sense. You don’t expect a lot of scientific grounding in Doctor Who, but you do expect the bare minimum and maybe some form of logic. Kill the Moon had no logic at all (at any time), and some parts in particular were utterly infuriating. 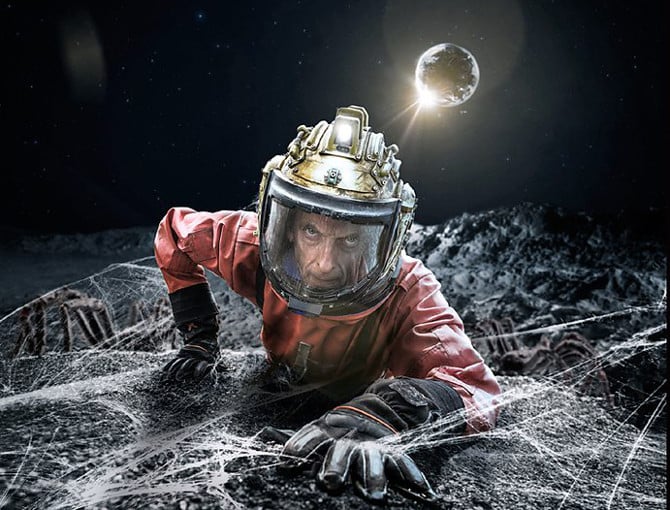 The first thing to note was the whole no-astronauts-and-no-spaceships bit, when we were expected to believe that ten years after human ingenuity put a mining colony on the Moon, we’d given up on all space travel and the only thing knocking about that could fly to our small neighbour was an old shuttle. So somehow, years of technological innovation led to one Mexican company putting one mining expedition on the Moon, after which everyone stopped going into space.

That Mexican company apparently didn’t have any of its ships left to send up once things went wrong up there, and none of the intermediate stages of spaceflight between the shuttle and a frickin’ mining colony were available either. And, no other company had thought that a mining colony somewhere in space was maybe a good way to make money and invested in that. So there was no way to get to the high-tech mining colony.

Even assuming that we could accept that (we absolutely can’t), we’re then also expected to believe that Earth sent up its last three astronauts with a bunch of bombs to save the planet and DIDN’T SHOW THEM HOW TO PRIME THE NUKES.

Next, the Moon is an egg. We all have enough imagination to accept that. What makes no sense at all is how that fact caused the Moon to gain 1.3 billion tonnes in weight. Chicken eggs don’t get heavier as they incubate, they get lighter. Where on the Moon did that mass come from?

Blind yourself to that piece of blatant illogic and you get straight on to the next one – how in God’s name would killing the beast inside the egg get rid of that mass? That’s the plan, right, to kill the creature so that the Earth is saved? But the Earth is in trouble because the Moon now has gravity. That won’t change whether there’s a 1.3 billion tonne unhatched egg up there or a 1.3 billion tonne corpse.

Even if you assume that the nukes will blow some chunks off the creature or explode it entirely, it’s a lot more likely to form back into a ball of corpse bits and egg shells under its own gravity and continue to cause problems than it is to drift harmlessly away. And if it did drift harmlessly away, there’d be no Moon at all. Not good.

Then there’s the Doctor’s treatment of Clara — less scientifically illogical, more just plain irrational, but still aggravating. It makes sense that the Doctor would give humanity the chance to decide its own fate and that he would feel that the only way to stay out of it would be to get out of the way. It makes a little less sense that he leaves the fate of the world up to Clara. But he says he has faith in her, so great.

Why then did he do his utmost to be rude, nasty and generally demoralising before he left? Why would you utterly undermine the confidence of someone about to make a literally Universe-changing decision by spitting in their face the idea that it’s time they took their training wheels off. Then leave them thinking they might die, and take a 15-year-old they feel responsible for with them? One can only agree with Captain Lundvik's (guest star Hermione Norris) assessment: “What a prat.”