Be nice to the public, PC Plod. Especially if you're trying to stop terrorists

Op Solitaire targets extremism risks via rifle clubs. And gets it SO wrong

Opinion Terrorism. A word which strikes fear, or quite possibly boredom, into the hearts of millions across the Western world. Add “terrorism” to “guns” and you've got a legitimate area of public concern. But what do you do when the police, acting with the best of intentions, repeatedly insert their collective feet into their mouths?

A nationwide police initiative called Operation Solitaire aims to target what the Association of Chief Police Officers (ACPO) evidently sees as a problem: people who hold extreme views, of whatever flavour, joining rifle clubs and gaining access to firearms.

This hypothetical situation would be a very bad thing, and it's to ACPO's credit that its Terrorism and Allied Matters committee (TAM) thought ahead, saw a possible problem and thought “we should let the licensed firearms community know how to spot unsuitable individuals and avoid granting them membership of rifle clubs”.

As ACPO TAM's internal magazine says: “Solitaire is a new product created by the Office of the National Coordinator of Prevent and endorsed by the national police lead for firearms licensing and national firearms agencies which represent gun users across the UK.”

It goes on to explain the purpose of Op Solitaire: “This interactive briefing tool aimed at reducing the vulnerability of those with legitimate access to firearms, to using these weapons illegally.”

So far, so good. Proactive policing aimed at nipping crime in the bud is, in most situations, a good thing. Unfortunately this is where it all starts going wrong.

Gun control in the UK has been a series of knee-jerk exercises driven mostly by political expediency. Infamously, Britain's Olympic pistol team is forced to train abroad after the entirely avoidable Dunblane massacre of 1996, in which a man - who the police had been repeatedly warned was unsuitable to own firearms - went on to murder 16 schoolchildren, aged between five and six, and their teacher.

The Dunblane massacre led directly to the pistol ban of 1997. People who had done no wrong themselves were punished for the actions of someone who the police could, and should, have stopped. A great deal of bitterness remains to this day in British shooting circles about the actions of John Major's dying administration, which implemented the ban – which included confiscation and destruction of lawfully-held pistols across Britain – and Tony Blair's incoming government, which extended the ban specifically to cover .22” pistols of the type used in Olympic competitions.

Fast-forward to today. The police have seen a way in which an unsuitable person might get hold of firearms and attempt to kill others. Very sensibly, they want to warn the shooting community about it. Public safety is best ensured when the public and the police are able to work together harmoniously to spot and act upon genuine threats.

Except that's not how Op Solitaire has been delivered in practice. A Durham shooter, who did not wish to be identified, told The Register that the police briefing he received “started off with 'the Anders Breivik and Derrick Bird shootings; what lessons can be learned?'”

Anders Behring Breivik murdered more than 70 people in Norway in July 2011. His motive was, in his warped view, to “save” Norway from multiculturalism. He is serving a life sentence in prison. Derrick Bird, a taxi driver from Cumbria, used his firearms to murder 12 people in a June 2010 shooting spree before turning the guns on himself.

Making the comparison between lawful firearms' owners and the horrific misuse of them in such a way is not going to endear you to the licensed firearms community, to put it mildly. “Overall the police took a lot of stick,” our source concluded, and it's not hard to see why. Indeed, a thread on the ARRSE forum about Op Solitaire goes into similar levels of scathing detail:

I wasted an entire evening listening to ********* from plod and the security services try and lecture us on how important our input was in defeating terrorism and then had the nerve to use Hungerford and Dunblane as examples of what we, the shooting community, failed to do.

As anyone from any rifle club or shooting ground in the country will tell you, the shooting community gave the police plenty of warning in both the Hungerford and Dunblane cases, and they failed to act.

So it was with some alarm that your correspondent read, in the latest minutes of ACPO's Firearms and Explosives Licensing Working Group (FELWG), that Chief Constable Andy Marsh – the senior policeman responsible for firearms licensing across Britain – was considering inviting Channel 4 to make a documentary (PDF, 12 pages; relevant part on page seven) about Op Solitaire: 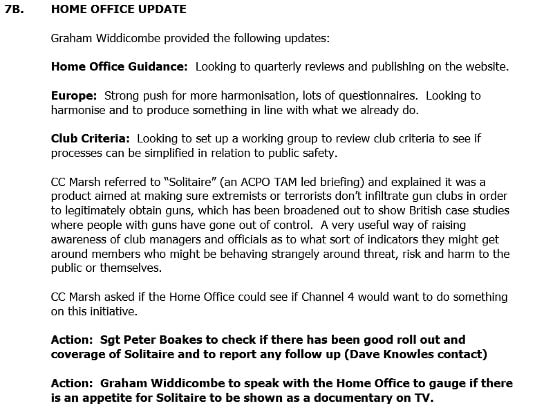 This raises a number of questions: primarily, why Channel 4? A cynic (who, me?) would suggest that a channel known for its left-wing slant on current affairs would be likely to produce something unfavourable to the licensed firearms community. Or, as a shooting acquaintance of your correspondent puts it:

I'd be completely fine with this if Channel 4 actually made and then showed a documentary about terrorists trying to join gun clubs because it would become obvious pretty quickly that this is a non-issue.

Yet, looking at the broadcaster's track record of sensationalism, it's unlikely that that would be the end product.

El Reg did ask Channel 4 whether it had been approached by the Home Office or ACPO to make a documentary about Op Solitaire. Channel 4 had not responded by the time of writing. We'll update this piece if it does get in touch.

Neither the UK NRA nor the British Association for Shooting and Conservation wished to comment for this column, on the reasonable grounds that their input into Op Solitaire was limited to presenting comments on the draft material; we understand neither organisation has witnessed a “live” Op Solitaire briefing using the final, approved material.

Nevertheless, it seems – in your correspondent's personal view – that Op Solitaire is being driven by a police need to be seen to be doing something, rather than actually achieving the desired effect. If Op Solitaire really is being delivered by police officers who present examples of police failures and then declare that the licensed firearms community were at fault, that isn't going to breed an atmosphere of mutual trust and respect.

And in an atmosphere of mutual suspicion between police and public, who would come forward and help the police? ®