Pic Incomplete yet more detailed measurements of Comet 67P/Churyumov-Gerasimenko, taken by the European Space Agency's Rosetta probe, were released on Friday. And now you can 3D print your own copy of the cosmic rock as a result.

Boffins at the ESA said that working out the exact dimensions of the mighty rock would take time. They plan to unveil more information about the comet as further data becomes available for analysis, for example, when 67P/C-G changes as it moves closer to the Sun.

The space agency also offered up a new OSIRIS shape model of the comet (.wrl and .obj formats) to encourage enthusiasts to print off their own 3D version of the rock image.

"Because roughly 30 per cent of the ‘dark side’ of 67P/C-G has not been resolved and analysed fully yet, the shape model is very incomplete over those regions," the ESA said in a blog post about the latest developments in the mission.

"As a result, some of the derived parameters for the comet are only best estimates at present. These include the volume and the global density, the latter depending on the mass and the volume."

Since August, the Rosetta probe has been hurtling along very close to Comet 67P, which is currently more than 465 million km from Earth as this neat interactive tool, complete with a SPAAACEY soundtrack, demonstrates.

The ESA published a table summarising the approximate dimensions of 67P/C-G. It also details "other known parameters derived from observations made by Rosetta". 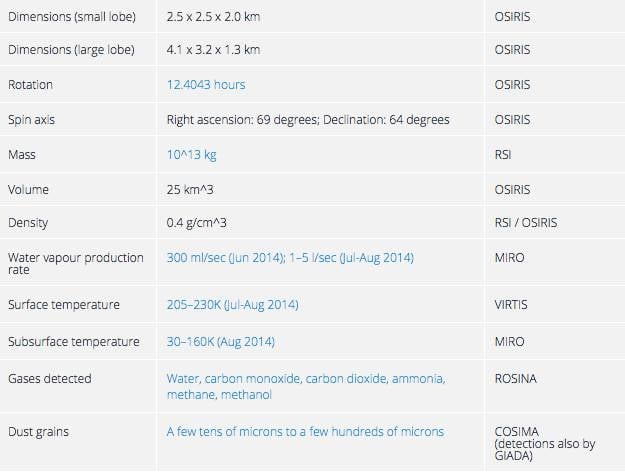 On 12 November, the agency is set to boldly deploy its lander Philae to the surface of the rock, after Rosetta's epic 10-year-journey through the solar system. If all goes to plan, it's expected to touch down on the top region labelled "Site J" by the team. ®