Scientists have cooked up a patent-pending hybrid device that combines a solar cell with a rechargeable battery for the very first time.

The solar battery was invented by boffins at the Ohio State University, who used a titanium gauze permeable mesh solar panel, which they say was key to the success of the entire US department of energy project.

The state of the art is to use a solar panel to capture the light, and then use a cheap battery to store the energy. We've integrated both functions into one device. Any time you can do that, you reduce cost.

According to the researchers, whose work was published in the Nature Communications journal on Friday, the mesh solar panel "allows air to enter the battery, and a special process for transferring electrons between the solar panel and the battery electrode."

They added that light and oxygen found inside the device enable different parts of the chemical reactions that charge the battery.

Basically, it's a breathing battery. It breathes in air when it discharges, and breathes out when it charges.

The boffins believe that the solar battery decreases costs by 25 per cent because it apparently eliminates "the loss of electricity that normally occurs when electrons have to travel between a solar cell and an external battery."

Four electrodes are typically needed to connect a solar cell, but the hybrid design only needs three. 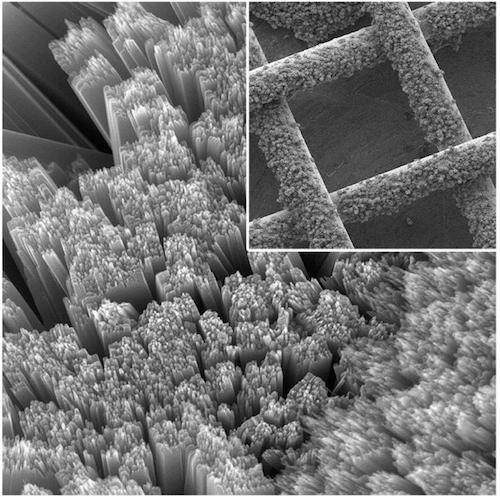 The mesh solar panel forms the first electrode. Beneath, the researchers placed a thin sheet of porous carbon (the second electrode) and a lithium plate (the third electrode). Between the electrodes, they sandwiched layers of electrolyte to carry electrons back and forth.

Here's how the solar battery works: during charging, light hits the mesh solar panel and creates electrons. Inside the battery, electrons are involved in the chemical decomposition of lithium peroxide into lithium ions and oxygen. The oxygen is released into the air, and the lithium ions are stored in the battery as lithium metal after capturing the electrons.

When the battery discharges, it chemically consumes oxygen from the air to re-form the lithium peroxide.

They added: "An iodide additive in the electrolyte acts as a 'shuttle' that carries electrons, and transports them between the battery electrode and the mesh solar panel. The use of the additive represents a distinct approach on improving the battery performance and efficiency."

The scientists said that they coated the mesh with rust to allow the battery to charge from sunlight while retaining its red colour. Wu hopes that the lifetime of the hybrid device will be comparable to rechargeable batteries. ®