Weekend reads: Consumed, The Graphic Art of the Underground and The Skeleton Road

Page File El Reg bookworm Mark Diston reviews the latest literary lures. Movie mogul David Cronenberg goes for the novel experience but does it play as well as his films? Ian Lowey and Suzy Prince explore 60 years of underground art in its myriad forms but, how is the genre looking today? And has revered thriller writer Val McDermid produced another spine chilling page turner? Read on ...

David Cronenberg is a Canadian filmmaker, famous for work such as: Scanners, Videodrome, The Fly, Naked Lunch, Crash and, currently showing in UK cinemas, Maps to the Stars. Consumed is his first novel.

Cronenberg's tale features a couple of photo journalists Naomi and Nathan, who come from New York, but are never at home, conducting a mostly virtual relationship, occasionally catching each other between flights in airport hotels.

The book comes across as a satire of gadget fetishism, Naomi and Nathan only use the hippest brands, there is absolutely no chance of catching them using Android or Windows 8. In their world, it’s Apple or Nikon only. Consumed is sprinkled with such gems as: “The only authentic literature of the modern era is the owner’s manual” and: “Desire for a camera ... even a cheap one ... is enough to keep death at bay”.

At the beginning of the book Naomi is obsessed by Aristide and Celestine Arestoguy, a couple of intellectuals who teach a course called: The Philosophy of Consumerism. Celestine is found dead and mutilated in their Paris flat and Aristide has done a runner to Tokyo after posting graphic pictures of his partner’s body on the internet. Naomi follows him hoping to get an exclusive. 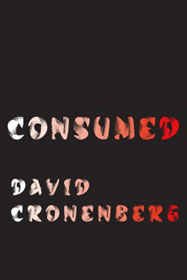 Meanwhile Nathan is filming a dodgy surgeon in Eastern Europe, he catches an STD known as Roiphe’s syndrome, after having sex with the surgeon’s dying patient. He manages to transmit the STD to Naomi during a one night stand near Amsterdam's Schipol airport ... he then goes to Toronto in search of the Dr Roiphe who discovered his malady, whose daughter is in the habit of mutilating herself with designer nailclippers!

Anyone familiar with David Cronenberg’s films will notice a few recurring themes. The sex is never straightforward, there is nearly always a graphic cybernetic or violent undercurrent: “The image fermented in Nathan’s brain and downloaded through his penis into Naomi’s hot distracted mouth”. So what’s on Naomi’s mind? A bear killing a deer, of course! “It ripped the deer’s throat out and then licked the dying deer with the most passionate affection. I thought of you and me”.

For the first eight chapters, Consumed is an amusing and thought-provoking parable on how we use our gadgets and how they use us, Cronenberg is full of ideas and doesn’t stray too far into intellectual wankerdom.

Consumed owes a great deal to writers such as William S. Burroughs and J.G. Ballard, but what makes Cronenberg different to his influences is that his book is set firmly in the here and now, not a dystopian future. He also does a great job of parodying the French philosophical and cinematic tradition. There is more than an irreverent touch of Guy Debord’s The Society of the Spectacle and Roland Barthes’ Camera Lucida tucked away in the text.

The opening Paris section is also full of references to the Nouvelle Vague French filmmaking scene from the 1950s and 1960s, but this is no intellectual exercise, Cronenberg lampoons his sources. One of the most interesting things about this book is that he updates some of the ideas of the French philosophers into the 21st Century.

For the first eight chapters, Consumed is an amusing and thought-provoking parable on how we use our gadgets and how they use us, Cronenberg is full of ideas and doesn’t stray too far into intellectual wankerdom. Thereafter, Aristide begins to explain to Naomi his life with Celestine and without wanting to give too much away, the whole novel goes titsup in more ways than one and degenerates into utter confusion.

The ending is a contrived, incoherent mess and not even an interesting mess. Rarely have I read a novel which promised so much and fucked up so utterly. This is a novel of two halves, I would gladly recommend the first eight chapters, the rest feels like a waste of time. Without a screenplay featuring some rigorous rewrites of the latter half, even Cronenberg would struggle to make a decent movie out of it.