CONSUMERISM IS PAST ITS SELL-BY DATE: Die now, pay later

The customer was always right

Crawling from the Wreckage John Watkinson, in his latest instalment for El Reg, argues that consumerism, as it is practised today, is an invention that now does more harm than good both to quality of life and the environment. We are on a driverless train to nowhere and we need to jump off.

The economic crash exposed all that is wrong with how we conduct our affairs. Many people feel not just let down, but powerless to do anything about it. But we should not feel powerless: under present conditions the individual has more power than ever before to control his own fortunes and needs to begin to use it. This is just as well given that those who conduct our affairs show no signs of changing their ways. They want to get back to business as usual as soon as possible and will if they are allowed.

Business as usual is the only way rigid organisations can operate; workers are shown only what to do, but not why they do it. They are not paid to make value judgements; in fact they are forbidden to do so. When circumstances change, someone with a bit of wisdom would recognise the fact and perhaps act differently, whereas the rest carry on doing what they have always done.

Minions act in that way to keep their jobs, but what about their bosses, their leaders? They often adhere to dogma. Frequently the nature of their dogma is so inseparable from their identity that they fear that if they were to do something outside it they would no longer know who they were. That’s how to recognise a politician or a church leader.

Still, dogma is just a set of fixed assumptions that have no rational basis. In fact, the less rational the dogma the more tenacious the adherent’s grip and the greater is the fear of those who believe otherwise. The field of view and the mind compete to see which can become the narrower. Tradition, dogma and fear form a pretty shaky foundation for problem solving and the evidence is all around us. Many problems can be solved much quicker using logic.

Another difficulty is our tendency to place someone in control of a single feedback loop and judge them on its performance. The problem with feedback loops is that they measure only one thing and ignore everything else. It follows immediately that when someone’s goal is to meet a given financial target or else, then anything that achieves it will be employed, including over-fishing, clear-felling, bribery and selling nuns into slavery. It’s not that bankers are unethical, it’s just that ethics has been eliminated from the system in which they work.

Tradition is a perfectly streamlined concept. It allows you to go forward immediately without wasting time understanding either the problem, or boring stuff like physics and risk assessment. It is only necessary to re-define what “forward” means and all is well. To paraphrase an amusing comment on my previous piece, Wyle E Coyote is always moving forward when he goes over the cliff edge. 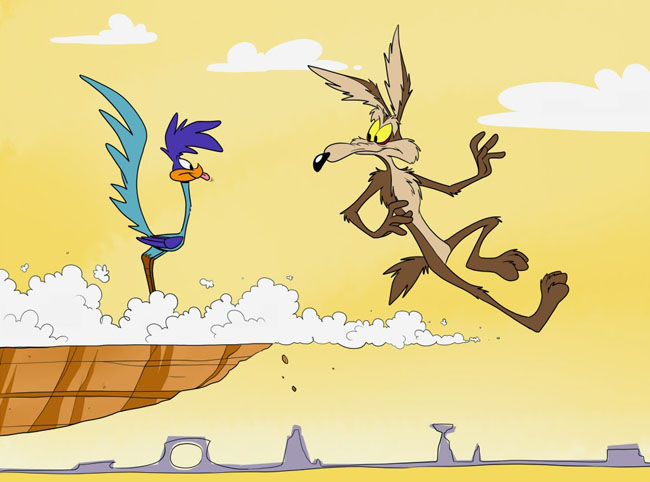 I have argued that economic growth is not an absolute necessity, but is just a symptom of excessive borrowing. That borrowing causes us two major problems. Firstly, in the short term, running an entire country on a negative amortisation mortgage is a supremely risky business and indeed it is a year and a half since the UK’s credit rating was downgraded to underline that risk. In that time the National Debt has continued to go up as if it didn’t matter. Secondly, in the long term, indefinite economic growth is not possible as it violates the Laws of Thermodynamics and would result in Earth becoming uninhabitable long before it otherwise would. I propose to expand on that in a future piece.

Next page: And now it's time for a message from our sponsors
Page: