ARM spreads tentacles up and down the stack

Cloud-connected OS ramps up its IoT challenge another notch

Signs of slowdown in mobile device growth have driven ARM to expand aggressively into new areas for its processor IP – from servers to home equipment to the internet of things (IoT).

The UK firm’s activities in new classes of microcontroller, in a new type of embedded operating system with cloud connectivity, and in would-be standards like Thread indicate that it will not be relying on its heartland licensing model to fend off Intel and Imagination/MIPS in the IoT, but will rather attempt to get its tentacles into every layer of the IoT stack.

ARM is putting together the pieces to offer its licensees a complete platform whose elements will span connected devices from tiny embedded sensors and "smart dust" to wearables.

In so many of these categories, the economics will depend on integrated, pre-tested inclusion of an entire stack, including OS and connectivity, and ARM is jumping ahead of Intel and others, at this early stage anyway, in delivering most of the key components.

This is all about building power bases, long before the market is really there. The mobile industry went through the process of consolidating around a small number of operating systems, processor platforms and connectivity options. Together, those three elements could support a huge diversity of devices and applications, but the real power to drive the market lay with the companies which controlled the OSes, the chips and the protocols.

Many assume the same process will repeat itself in the far more diverse and fragmented internet of things (IoT), and they are already positioning themselves to take the role that Google, Qualcomm or Ericsson had in 3G/4G. The playing field is wide open still, partly because there will be so many subsets of the IoT (many of which will use highly specialised underlying technology), and partly because there are more layers of the stack to consider.

There are chips at a far wider range of power and performance than mobile devices required, and those require different types of operating systems, which in turn create different developer ecosystems. And connectivity is not just about wide and local area, but personal area and body area. Nor is everything in the IoT actually internet-connected, so there must be support for "dumb" devices, non-IP protocols, peer-to-peer meshes and many other variations in how "things" link to one another and to the gateways and servers. Hence major players' need to have control or influence over a wider variety of technologies than in the relatively homogeneous cellular device sector.

Three key moves by ARM in the past weeks indicate its strategy is to cover as many bases as possible: its announcement of the mBed OS this week; its new additions to the Cortex-M microcontroller IP family; and its founder membership of the Thread group, a connectivity standards play led by Google’s Nest division.

The mBed OS, a new breed of RTOS 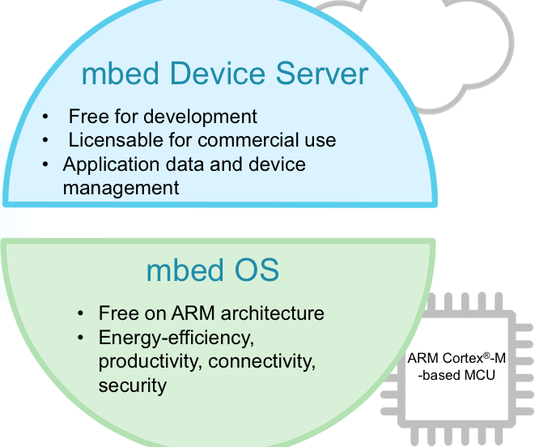 Last week ARM released a platform that bridged the gap between full processors and low end microcontrollers for IoT (internet of things) applications, with a high end implementation of its Cortex-M architecture.

The new M7 pushes the performance of a microcontroller almost into the realms of a microprocessor, nipping at the heels of ARM’s own Cortex-A designs and Intel’s Quark (see Wireless Watch September 25 2014). Now it has done the same for the operating system, upgrading its mBed embedded software platform to provide a new kind of OS, which sits between full smart platforms like Android and the ultra-low footprint real time OSs of the conventional embedded sector.

The firm said its new code will "provide a bridge between the protocols on IoT devices and the APIs used by web developers”. The embedded software will integrate with a server-side OS for cloud-based IoT management, networking and security. This middle territory is also targeted by Intel’s Quark and other chip designs, and will be important for IoT products such as gateways, which require more intelligence and processing power than traditional embedded gadgets.

The new mBed OS not only aims to add more functionality to a Cortex M-class microcontroller, but also provide a common platform that could become a de facto standard. Of course, in the process, ARM risks making enemies of the RTOS suppliers with which it has worked closely in the past – some of whom may renew their interest in alternative architectures.

However, the fragmentation of the embedded market among many real-time operating systems will hold back developers and limit the growth of a harmonised ecosystem, argues ARM – the kind of claims being made by many drivers of would-be standards up and down the IoT stack, such as Qualcomm’s AllJoyn for peer-to-peer discovery, or Google’s Thread for connectivity.

Most of the work to drive the IoT towards a single OS has been done on the higher performance devices, with Android the prime contender for intelligence connected devices like wearables and smart home appliances. But a host of RTOSs exist in the M2M world, which is now morphing in some areas into the fully con-nected IoT. One of them, it is always worth remembering, belongs to Intel, via its acquisition of Wind River, with its VxWorks RTOS and its real-time Linux implementations.

Next page: Get into mBed: The functions
Page: