Windows 10 feedback: 'Microsoft, please do a deal with Google to use its browser'

Users quick to have their say in Redmond's early feedback app

When Microsoft announced the preview of Windows 10, it emphasised the “opportunity to influence product development decisions through the new Windows Feedback app directly within the product".

Users can not only give feedback, but also see — and vote on — the feedback of others, giving all of us a chance to assess what users think of Microsoft’s latest offering.

Microsoft is trying to remould Windows away from its radical Windows 8 remake into something more familiar to Windows 7 users. Live tiles used to live only in a separate Start screen but have now been brought into the desktop, in a panel alongside a revived Start menu, and the touch-friendly Store apps now launch in desktop windows.

But if live tiles are now in the desktop, should they have more of a role? “It would be great if app tiles could also/alternatively be pinned to the desktop (like Windows 7 widgets)” is one popular suggestion.

And why is the new panel crippled, compared with the Windows 8 Start screen? “Let us organise our live tiles on the Start menu the way you could on the Start screen – with different headings/sections” is supported by 84 users so far. 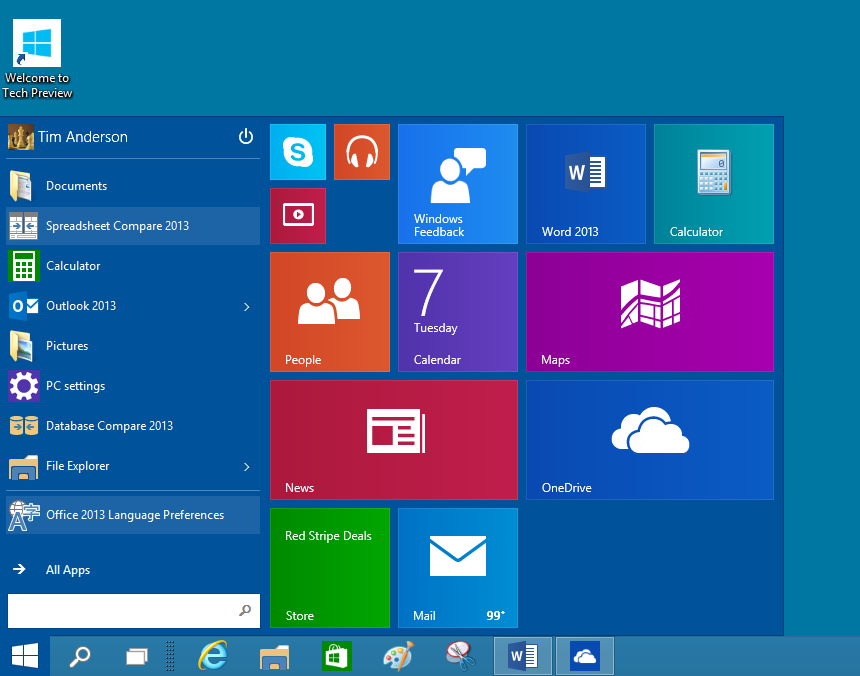 The way Store apps behave is another tricky area. Currently they open by default in maximised windows, but “modern apps should not all start in full screen in desktop view, some apps (eg, Calculator) should default to a smaller size,” say 30 users. Note, though, that Microsoft seems to have a fix for this already, at least for new apps, since the feedback app is itself a Store app and does not open maximised.

And what about Store apps that duplicate desktop apps? “Only one calculator, having two creates unnecessary confusion,” says a comment, while others miss having a choice of web browsers. “How do I get back Modern IE? Desktop IE feels archaic to me.”

Search is prominent in Windows 10, but “the search button isn’t entirely necessary on desktop, as you can access the same functionality from the start menu", say several users. Could it be that the second search button is a placeholder for Cortana, the automated personal assistant in Windows Phone?

Nor is everyone happy being force-fed Bing. “Allow other search providers such as Google or Yahoo,” say 62 users. What about the way Windows search mixes web and local results? 361 users agree that mixing Windows and web search is a “terrible idea ... if I want to search the web I will start IE.”

The way Microsoft bakes its own cloud services into Windows causes some discontent. “Let us be able to disable and uninstall OneDrive” say 46 users. Another tried to switch from Dropbox but found OneDrive buggy. “If I am to trust OneDrive, you need to fix bugs like this” is the conclusion.

Internet Explorer (IE) will receive a major update before Windows 10 is released, but it still comes in for a beating. “IE is terrible, give us the option on first login of which default browser to install and use," says one, while another opines “Microsoft, please make a deal with Google and use its browser ... [IE] is still as slow as a fart in a frying pan.”

Another user asks why IE still has “Automatically detect settings” on by default, ensuring a slow and usually fruitless search for proxy settings every time it starts.

Then there are the optimists. “Office Word, Excel and PowerPoint should be free and built into Windows 10, this would tempt people away from Chromebooks and Mac,” says a user, supported by 10 others. 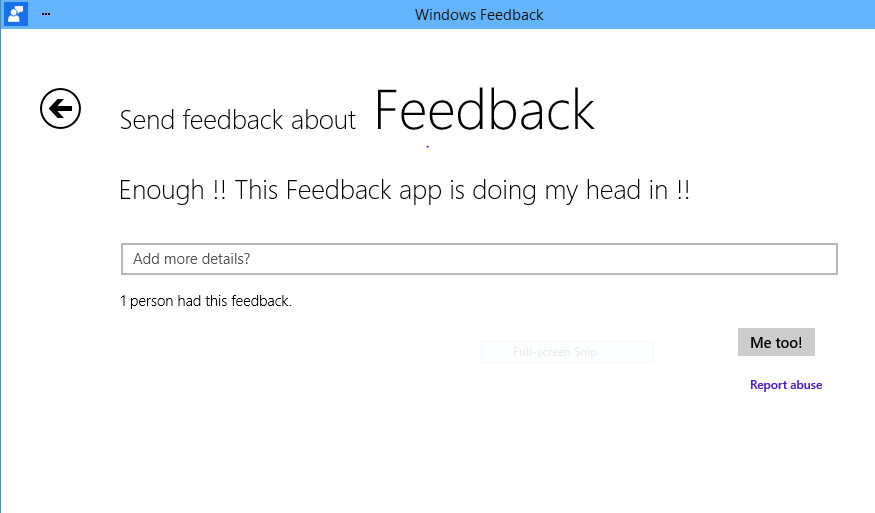 Finally, what of the feedback process itself? “If Microsoft would like its customers to do free software testing, could they at least provide a proper bug-tracking tool with severity level and current status,” observes a user, while another says simply, “Enough! This feedback app is doing my head in.”