No, silly... he was the fall guy for years of Finnish folly

Review Stephen Elop's decision to bet the farm on Windows Phone makes him the world's worst CEO, according to a new book published this week.

Operation Elop by Pekka Nykänen and Merina Salminen interviews former Nokia staff and arrives at its judgement based on the decline in Nokia's market value from 2010 to 2013: from €29.5bn to €11bn.

When Elop took the reins, in Q4 2010, Nokia still had a market share of 28.2 per cent in phone sales, shipping 117 million units to Samsung's 71 million and Apple's 13.4 million. At the time, Nokia's mobile OS of choice, Symbian, enjoyed 36.6 per cent of the smartphone market – making it the largest platform – and Apple's iOS just 16.7 per cent.

Granted, Nokia's share was declining – but that decline was to accelerate sharply. The market was buying a new, more capable kind of phone from Apple and Android licensees like Samsung. Pent-up demand for these devices, with which Nokia apparently could not compete, was about to explode. Wind forward four years, and the smartphone market is now around 300 million devices per quarter, almost 3x the volume.

Did Nokia overestimate its own hype?

But how fair is it to blame Elop for Nokia's years of neglect? Elop inherited a dysfunctional bureaucracy, warring factions, and a product team that took 18 months to develop a mediocre device. Nokia executives tended to overestimate its formidable brand and distribution power. And its own technological advantages in battery power and call quality were about to become much less important in the new era. Whoever took the CEO's seat in September 2010 needed to address these challenges – whatever decisions he or she would take.

Nokia employed over 16,000 people in phone R&D when Elop took the helm. One in three dollars spent in global phone R&D was being spent by Nokia, which devoted more resources to it than Apple devoted to all its products. Yet the Finnish firm still couldn't produce a competitive device.

Elop concluded Nokia's own software factory was beyond repair, and by choosing Window Phone, effectively outsourced the lot to Microsoft. (He maintained some platform development in-house: the low-cost Series 40 featurephone platform, and for a while, a Unix for midrange phones, until this too was eventually scrapped).

"Plan B is to make sure Plan A is very successful," Elop told reporters in June 2011. 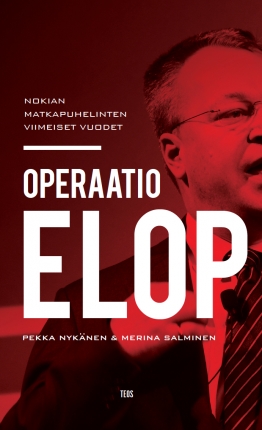 Operation Elop debunks the weird conspiracy theory that Elop had been brought in to sell the company back to Microsoft cheaply. This "Trojan Horse" theory is popular with with Finns and old Nokia devotees as they place the blame for Nokia's fate outside the company, on outsiders, not on the company its culture and organisation, which they feel are blameless.

The book also asserts that he was sold a pup: Nokia didn't realise you couldn't make conventional phones using Windows Phone. This assertion is almost as mad as the Trojan Horse conspiracy. Neither is plausible. Nokia had originally wanted to license its future platform, Meego, to all comers, but nobody was interested – so it would have had to plough a lone furrow, as BlackBerry has had to with BB10. And with similar consequences.

Next page: We're standing on a burning platform
Page: