Preview When it comes to Windows 10, Microsoft has so far spent so much time trying to explain the meaning of a "universal" app you'd be forgiven for missing one piece of news that should have a huge impact of the web - a new version of Internet Explorer.

Currently, the development version of Windows 10 does not ship with the new IE (there's no version number yet), but it does have the latest version of IE 11, including some of the improvements that were previewed in Microsoft's IE Developer Channel back in June.

Whereas Windows 10 Preview supposedly targets enterprise customers, the IE Preview Channel’s focus is developers. In fact, its existence is part of Microsoft's effort to create a more open dialogue with the web development community over the Microsoft browser.

The first IE builds were released in June and there have been some bug fixes and new features since then, most of which have been rolled back into IE 11.

As of today there is little difference between the IE Preview Channel and the version of IE for Windows 10 Preview, but it's likely that will change as the Developer Channel continues to update.

The first thing you will notice if you install the Windows 10 Preview is that there's only one version of IE, and it's the desktop version.

The Windows 8 "Modern" UI will be undergoing some changes, unifying apps across touch and mouse interfaces. In the mean time, it sounds like IE is going to stick with developing the traditional desktop interface and there won’t be separate browsers.

The big news in the latest builds of IE with Windows 10 Preview is support for HTTP/2, an update to the HTTP protocol that includes support for the SPDY protocol (pronounced speedy).

SPDY itself does not replace HTTP, rather it changes the way HTTP requests and responses are sent to and from your browser. The goal of the SPDY protocol is to reduce page load times and make connections more secure.

IE in the Windows 10 Preview also features an improved version of the Chakra Javascript engine. Microsoft says Chakra's Just-in-Time compiler has been optimised and the garbage collection subsystem has been revamped for "better UI responsiveness."

Another part of Microsoft's effort to reach out to web developers is the new Internet Explorer Platform suggestion box.

While IE 11 is, for all intents and purposes, a standards-compliant browser on par with Chrome, Opera, and Firefox, Microsoft pushes out updates with the latest and sometimes even half-baked web standards nearly as much as some of its browser peers.

With quite a few of those semi-baked standards out there, the IE team wants to know which ones are most relevant to web developers. Hence a a site where web developers can make suggestions and vote. What could go wrong?

This being the web, where good intentions meet unexpected responses and produce unintended consequences, the development community proposed that Microsoft's team stop development of IE. It would seem that the community still harbours some resentment for IEs 6, 7 and 8. For now at least, no good deed from Microsoft goes unpunished. 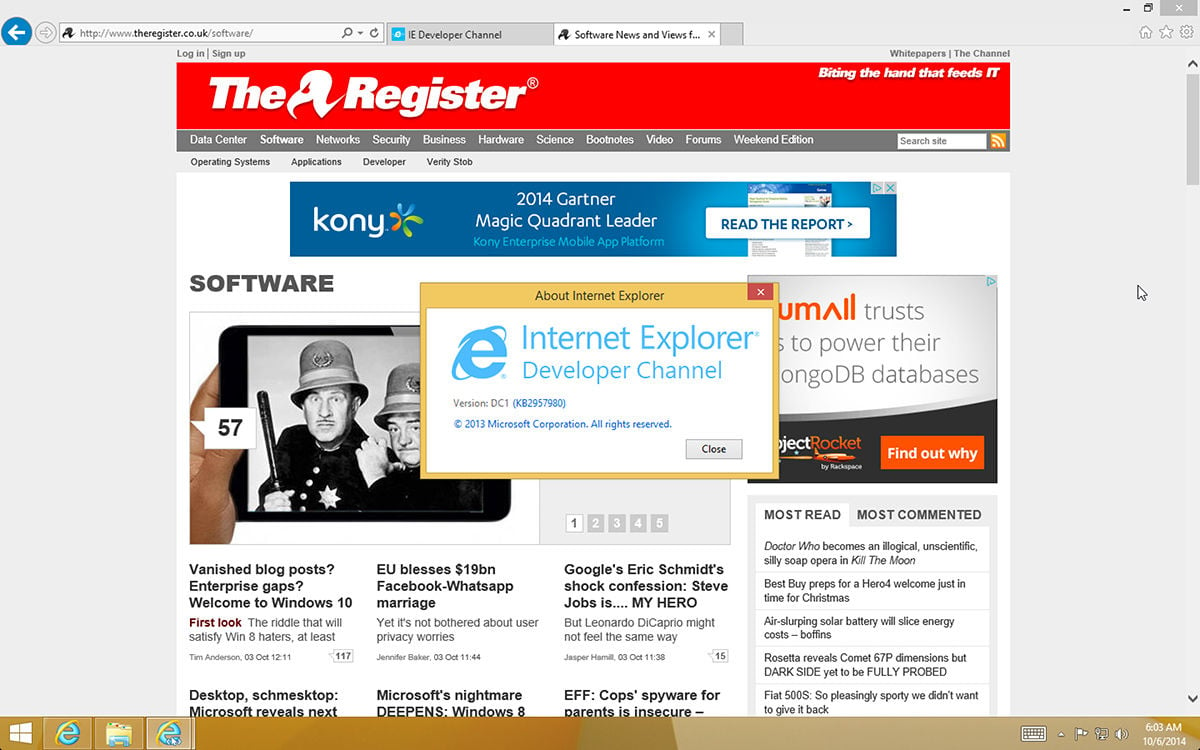 Already got IE 11? Then you might recognise this browser...

Still, the voting site has turned up some interesting requests. Currently the top feature web developers would like to see in the next IE is a way to "Auto Update Older IE Versions". In other words, get people off the aforementioned offences committed earlier in IE's career and onto something modern like, at the very least, IE 10.

The other top suggestions include adding support for the Shadow DOM, the new Picture element, service workers, and WebRTC.

The latter is particularly interesting since one of the things WebRTC enables is real-time communication in the browser, making it possible to build web-based competitors to Microsoft-owned Skype.

WebRTC support is already part of Chrome, Opera and Firefox development builds. Getting the same support in IE would make web-based chat, voice and video apps much more widespread and could signal the beginning of the end for Skype.

For now WebRTC remains very experimental and probably won't have the Skype team sweating any time soon. And there are uses for WebRTC that have nothing to do with building Skype competitors, but the suggestion is worth keeping an eye on, especially given the IE team's desire to embrace the web developer community. It's easy to support something like the new Picture element in HTML, where pretty much everyone wins, it will be more telling to see how the IE team handles something that potentially threatens another Microsoft property.

For now it seems Microsoft really does want feedback from the web developer community and it really is putting considerable effort into doing so. Now that the childish pranks are out of the way, hopefully the developer community can help steer internet Explorer in a direction that makes the web better for everyone.

The web succeeds because it’s an incredibly forgiving platform. It accepts anyone, even those using old versions of IE. Let’s see where IE goes next on Windows 10. ®