US astrophysicist Neil deGrasse Tyson: US is losing science race

'We've got bigger problems than your next app'

Rock star astrophysicist Neil Tyson says the United States has lost pole position in scientific research and its people must refocus on innovation rather than wait for "the next app".

Tyson (@neiltyson), Carl Sagan's former student and the narrator of recent popular documentary series Cosmos: A Spacetime Odyssey, said breakthroughs such as the first human Moon landing in 1969 ignited inspiration and attitude for a generation of scientists and technology innovators, a flame that has since started to flicker out.

In a keynote given at the MIRCon security conference which received a wide standing-ovation from thousands of technologists, Tyson enumerated major innovations in science, pointing out those successes of the United States in discovering 11 of the lanthanides and actinides listed at the foot of the periodic table, and building what was now the modern internet.

"Society has bigger problems than what can be solved with your next app, in transportation, and energy and health ... and they are solved by innovations in these fields," Tyson said. 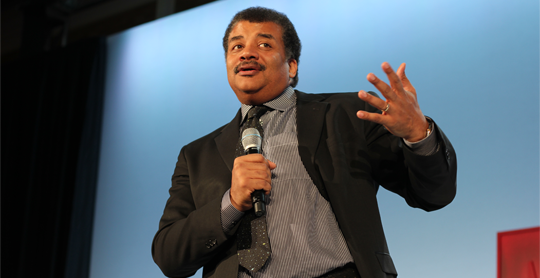 "I grew up in a country that discovered all those elements. That's not happening today. The centre of particle physics is in Switzerland.

"Interesting thing about science – it doesn't matter who does it ... it moves around. It was in Baghdad 1,000 years ago, in Europe 200 years ago, in the United States in the 20th century."

Great scientific feats inspired further scientific feats, Tyson argued, because it established an attitude and awareness within societies. In school, Tyson recalled speaking with a colleague about hypothesis of the universe and mathematical theory that was the kind of "random banter that set a [scientific] cultural expectation".

His comments followed a structured keynote speech, "The Cosmic Perspective", in which he discussed great scientific feats by the likes of Isaac Newton, Edmund Halley and Karl Friedrich Gauss.

Tyson reflected on how innovation often gave rise to new modes of warfare, from the theory of gravity and motion leading to advancements in projectile weapons, to relativity theory being used to build nuclear bombs, and quantum theory giving rise to computers and the first indications of cyber war.

The IT security audience, which included malware analysts, cryptographers and engineers, played a critical role in an innovative America, said Tyson. They were the "hidden sentinels" charged with protecting intellectual property, he said.

"Part of your job as internet security professionals is to protect the intellectual property, to make sure that at minimum it is not stolen, and also not corrupted which would [grind] everything to a halt," he said.

"You're the secret front gate to all of this. The rest of us don't think about what you do ... you need [security] just as much as you need people to invent things."

He closed his keynote with a reading from Carl Sagan's Pale Blue Dot. ®