Philae to touch down on 67P next month

Exciting news from outer space today, as it has emerged that a "mysterious" pyramid-like "structure" has been discovered on the surface of a comet plunging towards the inner solar system from beyond the orbit of Mars. 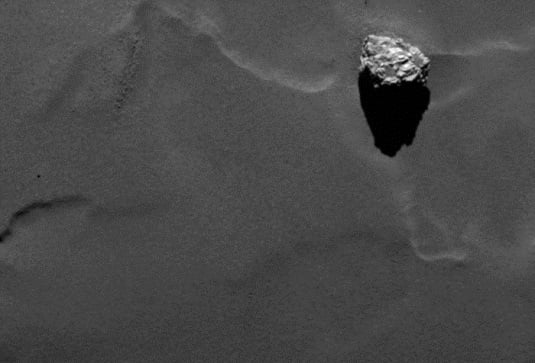 The comet in question is 67P/Churyumov-Gerasimenko, and the discovery has been made by the European Space Agency's "Rosetta" space probe, now in orbit around the speeding comet after a complicated ten-year journey from Earth. Next month, Rosetta will deploy its "Philae" lander to make the first ever landing on a cometary surface.

For now, however, Rosetta is engaged in making a detailed close-up survey of the icy, snowball-like 67P using its Optical, Spectroscopic, and InfraRed Remote Imaging System (OSIRIS). It is this survey that has discovered the strange object codenamed "Cheops" by ESA boffins. According to an ESA announcement:

With a maximum extension of approximately 45 meters it is one of the larger structures of this kind on the comet ...

[As it] reminded the scientists of the pyramids of Giza, [it] has been named Cheops after the largest pyramid within the Giza Necropolis. The ... structures that Rosetta has revealed on the surface of 67P in the past months are some of the comet’s most striking and mysterious features.

Cheops was seen for the first time in images obtained in early August upon Rosetta’s arrival at the comet. In the past weeks as Rosetta has navigated closer and closer to the comet’s surface, OSIRIS imaged the unique structure again – but this time with a much higher resolution of 50 centimeters per pixel.

Rosetta is in the process of moving in to just 10km above the 4km-across comet, from which lower orbit it will provide even more detailed images. On November 12 it will deploy its Philae lander to the very surface itself, at which point still more mysteries of the icy worldlet will be made plain. ®