Smoke Gets in Your Eyes, and Other Lessons from the Crematory

Caitlin Doughty is a mortician and founder of The Order of Good Death. Smoke Gets in Your Eyes is her literary debut and opens with her first day working at a mortuary in San Francisco. She leaves for work past a homeless man wearing a tutu and then encounters a flasher: “Whatcha think of this honey?” “Well man, I think you’re going to have to do better”

Caitlin is obviously not the sort of girl you are going to faze easily, and settles very well into her dream job. She definitely has an affinity with death, describing her first corpse: “He was also a noble, magical creature, like a unicorn or griffin… stuck with me between life and eternity”

There are many classic anecdotes, this from a colleague: “You know what I think? How we’re like hitmen, like the guys in Pulp Fiction”. And here is Caitlin musing while preparing her first suicide for cremation. “Cruel and selfish as many view suicide to be, I suppose I felt supportive of Jacob’s decision.” Perhaps unsurprisingly, she buys the box set of Six Feet Under with her first paycheque.

Smoke Gets In Your Eyes is much more than the reminiscences of an unusual job, there are excellent asides which describe how different cultures have dealt with death throughout history. 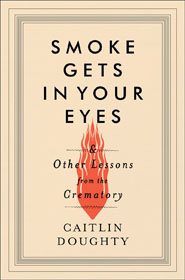 I’m not one for labelling, but let us just say anyone whose college thesis is entitled: In Our Image: The Suppression of Demonic Births in Late Medieval Witchcraft has gothic tendencies.

Indeed, a lot of her sources confirm this: Charles Baudelaire, Poe’s Annabel Lee, 15th century treatise Malleus Maleficarum and Octave Mirbeau’s Torture Garden. But there is a great deal more to this book than just a roll call of doom-mongers.

By questioning our attitudes towards death and revealing its absurdities, Caitlin Doughty brings into focus the great questions of life. The woman who pays for her son’s cremation to gain air miles and an article in a trade journal about makeup for dead babies are two examples that really bring home the ridiculousness of our lives and attitudes to death.

Then add in such musings as Otto Rank’s: “Modern love is a religious problem”, and Publilius Syrus’s old chestnut “We are all equal in the face of death”, and you have an impressive book which succeeds on multiple levels.

Caitlin Doughty quickly becomes aware of the absurdities and state of denial which surround western attitudes to death and her wide-ranging study of the subject leads her to question the way we deal with it and how it could be done better.

She leaves the mortuary and enrols to become a qualified mortician, thereafter she has worked in the industry. Her experiences and discussions with like minded individuals have led her to form The Order Of Good Death, an amalgamation of professionals and artists dedicated to changing our ideas and preconceptions of death. The website is also home to Ask A Mortician, Doughty's series of quirky videos on a variety of mortality related topics.

Smoke Gets in Your Eyes is brilliant, it is unlike any book that I have read – it contains the sublime and the ridiculous. It is educational, funny and asks all the big questions. Doughty does not pretend to know all the answers, but she comes over as exactly the kind of person you’d want to trust with your corpse. ®