The messaging cannot be any clearer. We, like much of the developed world, are in the midst of an obesity crisis caused in large part by eating too much.

Our super-size culture of fast food, sugary drinks and junk diets is turning us into a nation of over-sized and unhealthy slobs with expanding waist lines and it’s getting worse.

For example, according to a recent report from the National Obesity Forum, by 2050 more than 50 per cent of the UK population will be obese, at an annual cost of more than £50bn. It all sounds incredibly grim, and with headlines warning us that “sugar is more addictive than crack cocaine”, there is now increasing attention being paid to sugar and carbohydrates as the prime causes of this precipitous rise in obesity levels.

Dig below the surface, however, and this neat little narrative begins to look rather suspect. Firstly, is it true that we’ve been pigging it up big-time in recent years? Have we been stuffing our bodies with ever greater volumes of food? Well, if we look at the figures from the UK government’s “food and family” datasets (available here, if you’re interested), the story that emerges is rather different.

The figures on UK household and eating out nutrient intakes look rather different. Far from food intake, as measured by gram volume and calories consumed, rising steadily, it looks like a slow but steady slope downwards in the last dozen years or so: 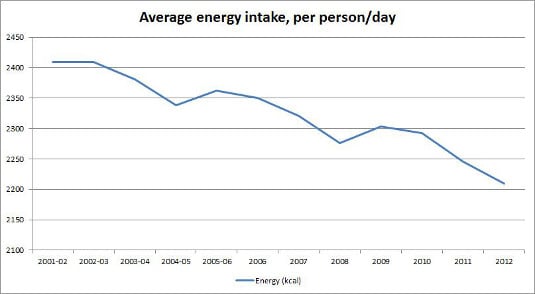 A nation of face-stuffing fatties: Or not, as the data shows

Let’s take a look at what we’ve been eating in terms of grams consumed, per person per day: 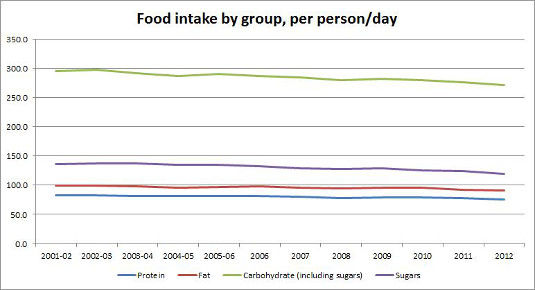 Huge change: I mean, just look at the angle of that massively sloping trend line...

All are heading down, in the same way as the calorie intake is. And in case you’re wondering, the proportions of calories from the different food groups is staying fairly constant, so it’s not as if there’s been a massive change in the proportional share of calories. The findings are also pretty constant when you break out social class and gender. Whatever’s going on here seems to be across the board.

The contrast between the popular narrative and the data is stark enough for contrarian health economist Christopher Snowdon to pen a report for the Institute of Economic Affairs entitled “The Fat Lie”. Snowdon’s argument is that it’s not food that’s to blame for the rise in obesity but lack of exercise.

However, before looking at this and some other possible explanations for obesity, let’s take a look at what the data says about the scale of this “obesity crisis”. As should be clear when you read a report that predicts an obesity rate of greater than 50 per cent by 2050, “obesity” is being measured on an absolute scale, not a relative one.

Far from the categories of “under-weight”, “normal”, “over-weight”, “obese” and “morbidly obese” being calculated by looking at the relative spectrum of weights in the population, we have a set of strict cut-off points based on the body mass index (BMI). This is defined as the ratio of body mass (measured in kg) and the square of height (measured in metres).

Note that this tells you nothing about the make-up of that body mass; there is no distinction between pure rippling muscle and unadulterated flab. Crucially, there is no measure there of waist circumference, which is what most of us use to make a judgement as to whether someone is a bit of a porker or a gym junkie.

Next page: Again, let’s take a look at what the numbers are telling us…
Page: