Yes, your air conditioning is a weight GAIN device

There’s more to reducing our energy expenditure than sitting around on our backsides in front of a computer screen or TV. A considerable amount of our daily energy budget is expended on maintaining a stable body temperature. It takes calories to heat up, and calories to cool down – and the use of central heating and air conditioning means the body has got a lot less to do than it used to. Heating and air con are literally two very powerful labour-saving devices that you never think of.

We’re now in the realm of speculation, of course, as we don’t have the same facts and figures to call upon as we did earlier. Yet on the whole it does seem that our changing lifestyles have meant we’re still taking in more calories than we need. There may of course be other factors involved, some of which may be significant. What about, for instance, changes in our metabolism? Now on the timescales we’re discussing, there’s no way that we’re seeing any signs of genetic change in the population. That doesn’t mean that there aren’t biological processes at work here, however.

One possible effect we’re seeing is a change brought on by changes in eating frequency or eating patterns. We might be taking in fewer calories than we used to, but are we taking those calories throughout the day (snacking) or at irregular intervals rather than at a smaller number at fixed intervals (three square meals a day)?

A recent small study looked at the influence of meal pattern on energy expenditure and found that irregular meal patterns resulted in lower post-meal energy expenditure. Even more speculative is the evidence that gut bacteria have a huge influence on our metabolism and that there are some species of gut bacteria associated with obesity. These gut bacteria are just hyper-efficient at extracting energy from the food we digest. The same diet can produce massively different levels of calories depending on the ecology of the individual’s gut.

In experiments the gut bacteria from obese mice have been transferred to non-obese mice and then the recipient mice piled on the pounds grams. Changes in gut bacteria have also been implicated in the rise of inflammatory bowel conditions and possibly even colorectal cancer. Could it be that what we seeing is partly related to changes in the gut bacteria across the population?

In any case, the key message is that when you next hear someone telling you that we need to impose controls on diet, or curbs on sugar, or proposing some regulation or other because we’ve been overfed, you just ask them for the evidence. Because if there’s one thing about the “obesity” crisis, it’s that the cause is not as simple as the narrative suggests.

And, as a parting shot, let’s return to the HSE data. How has the increase in obesity influenced long-term health trends? 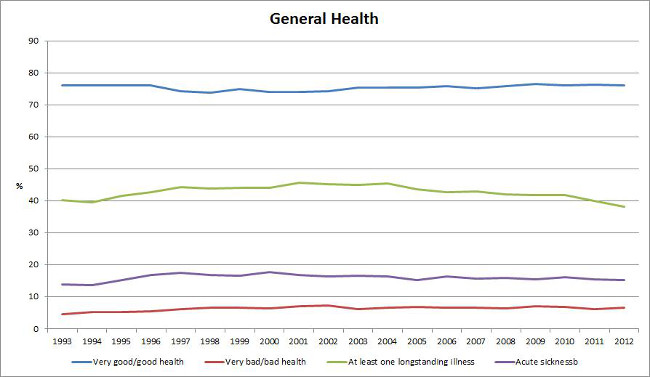 Analysis Meanwhile, Euro supercomputer project makes a call for developing an HPC ecosystem based on the architecture
HPC8 Feb 2023 | 3

So much for the workers' paradise: Big Tech gives its discards months of severance pay
On-Prem8 Feb 2023 | 8