Review The Vanmoof electric bike is the future of cycling; OK, maybe not of all cycling, but certainly of my cycling. 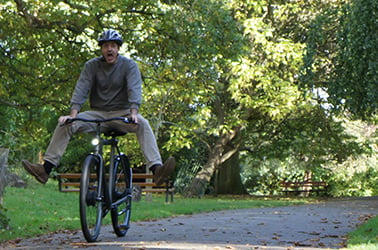 Vanmoof is a utilitarian city bike designed for getting Dutch people from home to work and back again. I use a Ridgeback mountain bike to cycle into Vulture central and it’s not a particularly appropriate bike, so the contrast with my weekend loan of the Vanmoof electric is marked.

You switch it on with a remote control and there's a 42v, 2.0A charging brick with a laptop style adapter that takes about three hours to charge. Surprisingly, there's no protection over the plug socket.

The Vanmoof has a 250-watt motor in the front hub. It only works when you pedal and works harder the more you pedal. This is all about assistance, not letting the bike do all the work. There are two levels of help and that’s it for the power controls, found on a touch panel on the cross bar. 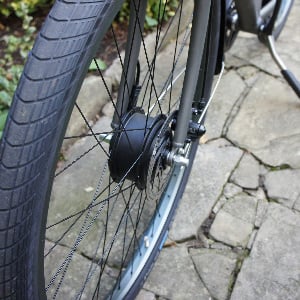 There's a separate area to tap that switches on the excellent Philips LED lights. These are beautifully integrated into the frame and properly bright. The batteries are in the frame so it doesn’t overtly look like an electric bike, although any proper cyclists will work it out enough to ask.

Not that many people had to. I volunteered the information that I was cheating to lots of people at traffic lights as I rode home from the office. 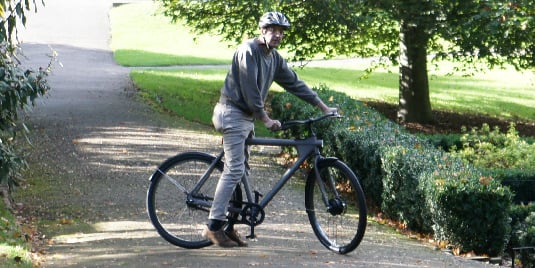 The GPX file for my ride home is here compare that with the my ride home on my Ridgeback. The thing to note is that my journey is substantially uphill, with one of the hills, Archway, being both steep and long.

The most spectacular difference is the total travel time. On the Vanmoof I got home half an hour earlier. Now a little of this is due to traffic, but substantially the difference comes from the speed up hills, while 14km/h looks a lot, I will happily barrel down Archway at car-matching velocities in the morning, so 54km/h isn’t significant. The assistance won’t take you over 25km/h — that bit is all me.

No, what matters is that on the low speed bits I could keep my speed up.

Comparing the ride on two bikes

Looking at the graph the red line is the Vanmoof, while the blue one is the Ridgeback. You’ll see that there are places where pure pedal outpaces powered but that’s probably down to traffic. Look at how the slow bits of the red line are well up on the slow bits of the blue one. Also, notice how the improvements from the power boost are more significant at the end of the ride when I'm usually very tired. This would be reversed if I'd gone far enough to exhaust the battery but Vanmoof claims that the range is 30-60km, depending on terrain. 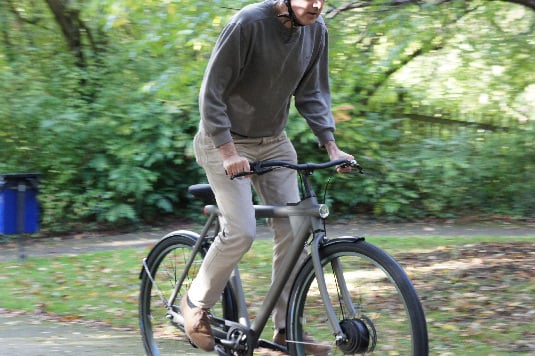 The ride is good. There are disc brakes and it’s a solid city bike. Sensible road tyres — rather than off-road — but a bit shaky over rough surfaces. A comfy saddle, full mudguards and a chain-guard. You don’t have to lycra up to hop on.

One thing that is very strange is that it’s a two-speed automatic. One less than a Boris bike and three less than sensible. It means that you can end up pedalling frantically in a quest for speed. And you do want to ride fast. If you have ever dreamed of having an ordinary looking mini with 1000bhp for annoying BMW drivers at traffic lights, this is the cycling equivalent. Sitting on what looks like a shop bike and keeping up with a rider half my age with coca-cola bottle shaped calves on something with razor thin tyres is great fun. It’s a Q-bike.

So as a commuting device, the Vanmoof makes sense. This is particularly the case as I’m not that fit and I justify my cycling as taking the two hours a day I would normally spend standing on the tube to get a workout. That means no need to go to the gym and a net gain of time, gym membership and tube fares. 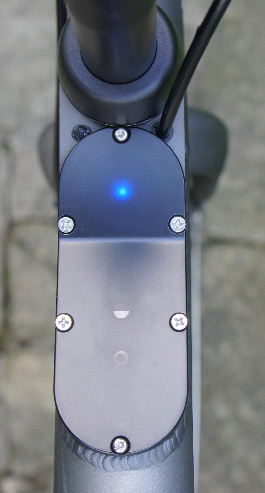 However, it doesn’t quite work like that because I’m so tired when I cycle home I spend a load of time bathing and recuperating and so the time saved pretty much disappears.

With the Vanmoof that time-saving comes back. With the morning commute taking half an hour and the ride home taking 40 minutes, then add 10 minutes for a shower at work and I’ve cut my daily commute time to 80 (not 120) minutes, and I’m in a fit state when I get home. OK, I get less exercise but it’s still a pretty decent week-day regime.

What it doesn’t do is save money, because the Vanmoof is £2,000. That’s about 10 times what my bike cost and nearly three times what I paid for my car. Ultimately, it’s got to be a lifestyle choice.

It’s a lifestyle I could get used to. I’d want something else for weekend cycling, but for the job it’s designed to do it makes sense.

I can see, however, that as I get older and the hills don’t get any less steep I’m going to need more help, and at some time, a bike like the Vanmoof Electrified will be in my future.

I’d like to thank Taco at Vanmoof and Anwar at The Bicycle Man – the UK importer – for the weekend loan. ®