The UK government is supporting a push by broadcasters — including, notably, the BBC — to put DAB into new smartphones.

Communications Minister Ed Vaizey will back the Universal Smartphone Radio Project initiative, also known as RadioDNS or Hybrid Radio, in a speech today, the Telegraph reports.

Much of the initiative is eminently sensible. It seeks to provide a common spec (pdf) for smartphone apps to discover and receive broadcast radio transmissions, as well as on-demand radio shows. The stumbling block is the digital radio transmission hardware. 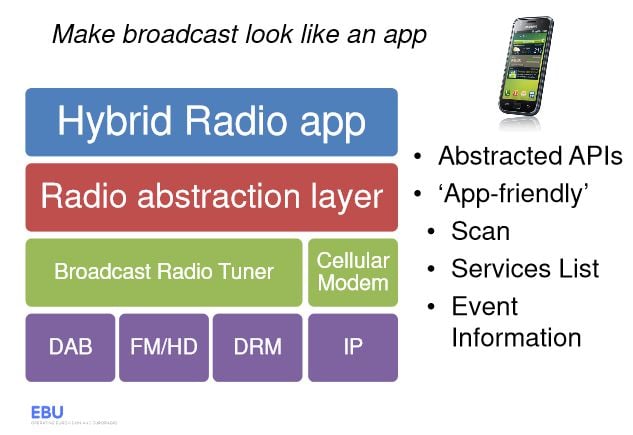 Radio DNS is all about integrating stuff. Source: EBU

Digital broadcast radio is fragmented across an alphabet soup of incompatible specs: DAB, DAB+, DRM/AMSS, and HD Radio, and all these require dedicated hardware. And, unlike FM radio, digital radio is also a power-guzzler.

So, integrating discovery and social media, which RadioDNS has already done, is the easy part. The hard part is getting a global giant such as Apple or Samsung to integrate chips and antennae that support DAB+ or DRM into their sleek and modern devices. It's been a long time since DAB, which was devised in the 1980s, looked like the future.

Neither D-Love nor Stephen Fry have persuaded the British public that digital radio is superior technology for mobile listening. Thanks to the BBC, the UK was an ‘early mover’ in digital radio and is now stuck with the oldest and most inefficient spec, DAB. Most use a 128kbit/s bit rate for transmissions.

Ofcom ducked the issue in 2007, concluding that it would be unfair to make the UK’s then 4.6 million receives obsolete, and the regulator has kept a low profile ever since. There are now far more receivers than that in the UK, and they don’t look any less obsolete. Meanwhile, the Ministry of Fun, which looks after spectrum in the UK, has realised that forcing us to use digital radios that stop working at Calais is not a vote winner.

And when you consider the transmission chain from a hardware vendor’s point of view, DAB looks even more like the odd one out. Here we see the very interesting Open Digital Radio project, a "low power" transmission system that uses a Linux PC. We wrote about it here. 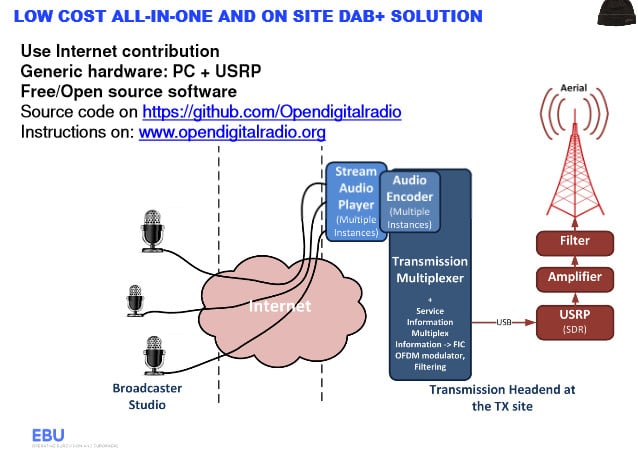 You’ll see how the broadcast travels from the studio to the mast via IP, from whence it’s converted into a radio transmission. A DAB radio within range can then pick up the signal. But a smartphone can’t. Since the transmission began as IP, and a smartphone already has a high bandwidth IP path, why not just miss out the bit in the middle? Digital radio makes smartphones more expensive, cumbersome and awkward, draining the battery. So, it’s likely that advances in IP will bridge that gap – rather than hope. ®