My tips don't lie and I'm starting to feel it's right

Pic Apple is expected to show off new iPads at an event on Thursday – but if you want to know the features of Cupertino's latest fondleslabs before they're announced, you need look no further than the company's own user manuals.

Pages in Apple's iPad User Guide for iOS 8.1, which hit the iTunes Store on Wednesday, diagram some of the features of yet-to-be-announced iPad Mini 3 and iPad Air 2 models. The ebook has since been taken down from iBooks, but not before a number of sites were able to grab screenshots of the pages showcasing the devices.

Among the most noteworthy features described is the introduction of Touch ID fingerprint sensors inside the new tablets' home buttons. The technology has until now only been available on the iPhone.

The guide also notes that iPads running iOS 8.1 – which was recently seeded to developers and is expected to ship to the public this month – will be able to take pictures in Burst Mode, a feature first introduced for the iPhone 5s. 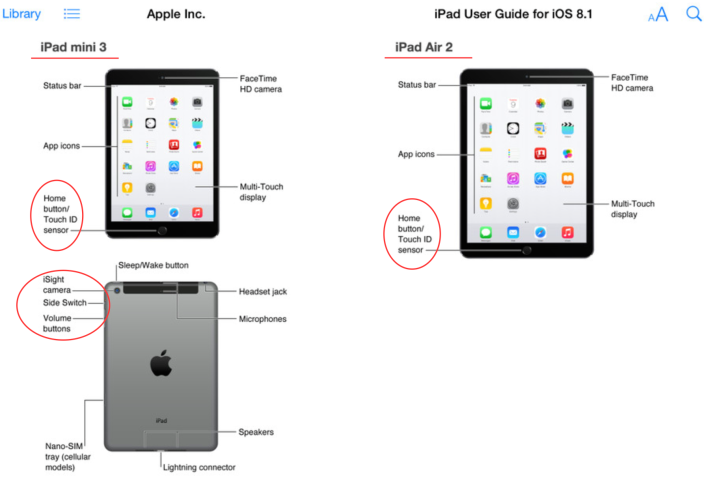 This leaked page from Apple's iPad User Guide for iOS 8.1 is a dead giveaway (click to enlarge)

Other details on the new tablets were scarce, but we won't have to wait long to find them out. Apple's media event kicks off at 10am Pacific time on Thursday and it's more than a safe bet that the new iPad Mini and iPad Air models will be the highlight.

In addition to the two models spoiled by Apple's manual, some believe Cupertino will spring its patented "one more thing" trick on customers and unveil a larger 12.9-inch iPad model, even though it won't ship until early next year.