Bono has apologised for sending U2's latest album into every iTunes library in the world.

The singer's apology came, ironically, in a video to promote the album to those who didn't get it for free in iTunes. That video, posted to Facebook features a Q&A session in which a fan asked U2 never to release an auto-downloading album again. “It's really rude,” said questioner Harriet Madeline Jobson.

Bono's response opened with “Oops … I'm sorry about that” before offering this explanation:

“I had this beautiful idea. We got carried away with ourselves.

Artists are prone to that kind of thing

Drop of megalomania. Twitch of generosity. Dash of self promotion. And deep fear that the songs that we poured out life into over the last few years mightn't be heard.

There's a lot of noise out there. I guess we we got a little noisy ourselves to get through it.”

None of which constitutes a resolution to ignore an iTunes dump in the future. 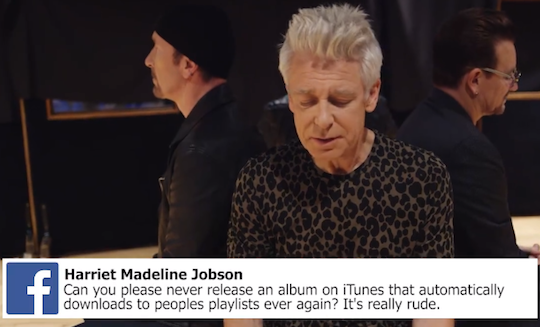 U2 in apologetic and megalomaniacal mode during fan Q&A

With reception for the album muted, even iTunes might not be able to help the band's next album. ®