Martha Lane Fox: Yeuch! The Internet is made by men?!?

Sisters, overthrow the phallic patriarchy of the packet 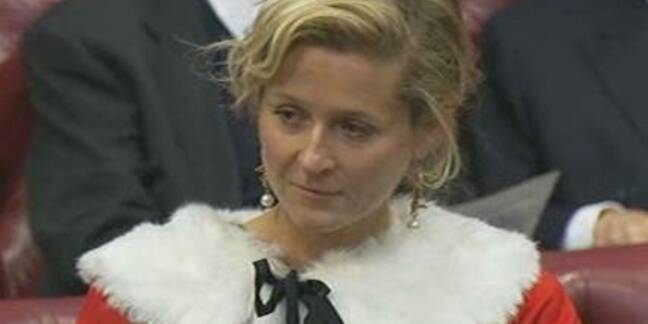 Comment Baroness Lane-Fox of Soho has talked of her discomfort that the internet is made by humans who have a penis.

The former Martha Lane Fox, CBE, told the Radio Academy's Radio Festival in Salford that she felt uneasy "that something that is now fundamental, like the water, for everybody’s daily life has been entirely produced by men."

Alas, she's right. Unlike Cuban cigars, which according to legend are rolled on the thighs of (female) virgins, internet packets arrive through a brutal, phallus-dominated patriarchy. It's enough to make anyone queasy.

Martha Lane Fox is a niece of the sixth Marquess of Anglesey (her great-aunt Felicity Lane Fox was once also Baroness Lane-Fox), and was appointed to the House of Lords a year ago – a stunning riches-to-riches story.

Talking to the BBC's Fi Glover, Fox also offered her solution to the widespread disengagement with politics served up by political and media elites.

And what was her answer? More choice? A radical devolvement of power? Actually, no. People must be made to vote using electronic voting systems, she says, even though today's systems are considered by security experts to be insecure and wide open to fraud. In Fox's opinion, though, this makes them even more doubleplusgood.

"I would argue immediately that voting should be mandatory and it should be online. Of course, we can cover for all the fraud and I don’t think it makes the procedure any less robust, in fact quite the opposite.”

So, the more insecure an e-voting system is, the more secure and reliable it is. Because digital, or something. Are you following?

Comment: Posh, crackers and in your face all day

Few people can now remember what it ever was that the Baroness of Soho once did. However, thanks to a quirk of ancient English law, the BBC is obliged by its Royal Charter* to broadcast every half-formed thought that passes through Martha Lane Fox's brain, no matter how incoherent it is, or how cretinous it may sound. (This is the so-called “Fry Obligation”.) This means the modern “Martha Lane Fox” is as much a BBC creation as UKIP, and without the state broadcaster's enduring support, she would probably be running a cat sanctuary or a sustainable hat boutique in the Cotswolds, with minimum collateral damage. (Except to cats in the Cotswolds).

As it happened, MLF was appointed to the boards of M&S and Channel 4, given various symbolic non-jobs (eg, “Digital Champion”) by the state, before creating a blueprint for a state-funded IT department that's very much in her own image: this is the controversial GDS, or Government Digital Service.

And don't say you weren't warned. It's 14 years since El Reg ran a profile titled The Wit And Wisdom of Martha Lane Fox - where we noted that, "you can't, in Britain's classless society, keep a good toff down." ®

*We made this up. The rest, though, is true.

Martha Lane Fox: Brexit is all about MEEEEeeee!

Comment As long as our Establishment thinks digital is magic, it can avoid the oiks

It's the Peer 2.0: Martha Lane Fox now a crossbench baroness

Tesla's autonomous lane changing software is worse at driving than humans, and more

Roundup Also, one man launched a legal battle against the police for using facial recognition cameras in the UK

Martha Lane Fox to clone 10m copies of self