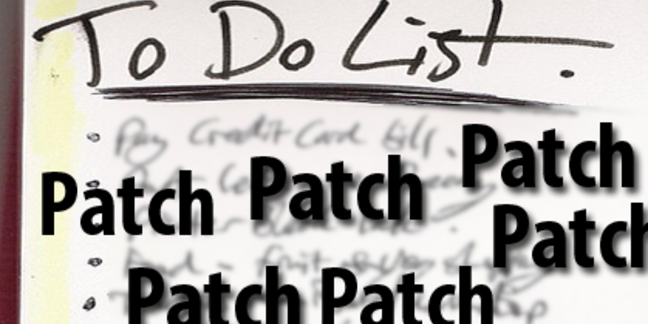 While the world+dog was distracted by all the shiny new iThings Tim Cook was showing off on Thursday, Apple quietly puMPED out patches for 150 CVE-issued bugs in its server and desktop operating systems and the iTunes media player.

The newly released OS X Yosemite, version 10.10, includes a fairly hefty patch load, more so than most other operating systems at launch. In all there were 45 CVE patches for the new OS, and some pretty major flaws fixed. There's a similar set of updates for OS X Mountain Lion (10.8.5) and OS X Mavericks (10.9.5).

Bash gets a patch to fix Shellshock and SSL 3.0 support also gets attention to fix the POODLE (Padding Oracle On Downgraded Legacy Encryption) flaw in its operating system. But there are a host of other serious fixes, such as the ability to brute-force the PIN for Find My Mac, dodgy Wi-Fi and Bluetooth security, and a host of remote-code execution flaws.

But it was iTunes that got the biggest patch load – 83 of the things that were deemed worthy of fixing in Apple's somewhat bloated media player. The patch listing also shows quite how closely Apple and Google have become intertwined on security.

Of the patched iTunes flaws, Google discovered 31, with Apple managing 30, and two patches coming from a combined effort from both companies: that's due to Google finding vulnerabilities in WebKit; there's a certain amount of software crossover between the two companies.

Elsewhere are patches for OS X Server versions two, three and four, with the latter getting the bulk of fixes with 18 CVE patches, which the two prior builds got one apiece. Mountain Lion and Mavericks also got a security update in this patch cycle. ®