Man, that iPhone 6 Plus won't fit in my pocket. Oh, here's a mobe store that'll resize my jeans

A retailer in China has found a novel way to accommodate the added dimensions of Apple's iPhone 6 Plus – adjust customers' pants* to fit the large handset. 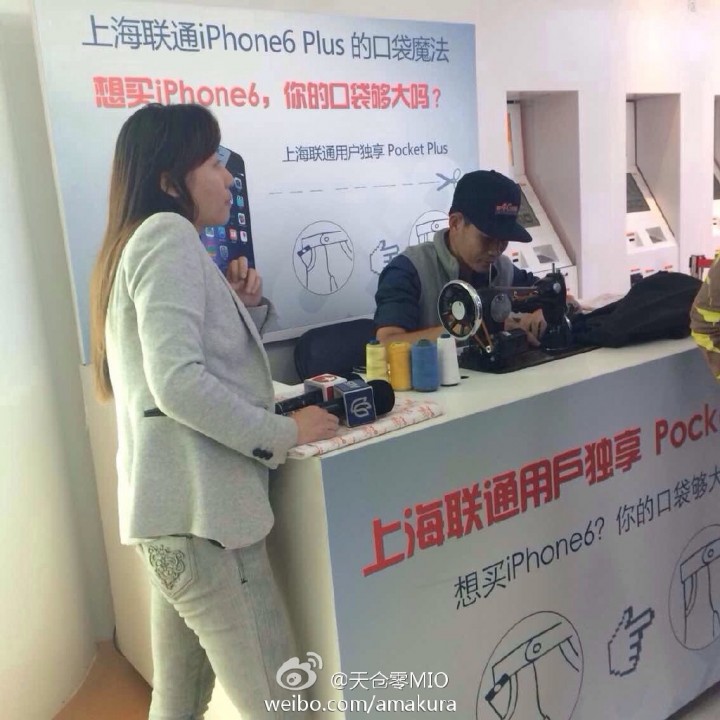 The picture shows a tailor in the store adjusting pants' pockets, presumably making the pockets wider and deeper in order to properly accommodate the iPhone 6 Plus.

The move is likely a publicity stunt to coincide with the Chinese release of the iPhone 6 and 6 Plus. The latest Apple handsets reached the mainland earlier today. Early reports show that, at least in shops, users are far less enthusiastic about queuing up for another iThing.

Nevertheless, Apple has said the iPhone 6 is selling like hotcakes worldwide: CEO Tim "Chairman Honeycrunch" Cook claimed earlier this week that the iPhone 6 and 6 Plus are the fastest selling editions of the Apple handset to date.

Even with the big sales numbers, however, there has been some concern that the larger screen of the iPhone 6 Plus was presenting a portability issue for those more fashionable fanbois who wanted to pocket the phablet.

Shortly after the release of the mobe, users reported that the thin aluminum casing on the 6 Plus was prone to bending when put through the everyday stresses of being carried in a pocket. ®