This time we play for ALL the marbles

Charge the lasers, deploy the sharks 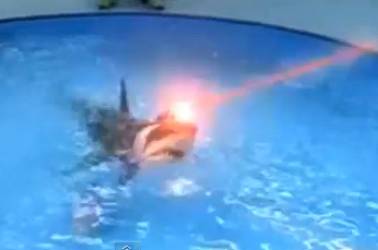 As you might have guessed, providing massive vertically integrated hardware and software stacks like this is not a game of startups and venture capital. The SDI war is one of powers and principalities. It is the game for all the marbles, and no company that sells only a single piece of the puzzle will ever again achieve the status of "empire".

Think for a moment about smartphones, Ultrabooks and so forth. In the consumer sphere, we consume our computers as whole entities. We have long since relegated "computers that can be built from parts and/or upgraded" to a niche. An important niche to many of us, but a rapidly diminishing one nonetheless.

In the consumer world, computers are consumed whole, and discarded when they are obsolete. They come pre-canned with an operating system, software, and increasingly monitoring, cloud storage, and a spate of other services. When you buy your computer from the phone company, those services include internet connectivity, mobile device management, device tracking, security and so on and so forth.

This is what the SDI wars are going to be about. It is the only way in which on premises infrastructure can hope to compete against the sheer ease of use of the public cloud.

I realise this is blasphemy to those who jobs depend on possessing the right cluster of certifications, but IT infrastructure is a cost center. Puttering about with infrastructure doesn’t actually deliver value to the business.

What delivers value to the business is doing something with that infrastructure.

Resizing LUNs does not add value

The future of business IT – from the one man shop straight through to the Fortune 500 – is in delivering infrastructure in a can. Open the box, plug it in and you have compute, storage, networking, backups, disaster recovery, cloud gateway, WAN optimisation, monitoring, analytics, alerting and so forth all preconfigured and ready to go.

When you move a workload onto an SDI block, it will detect the application(s) involved and automatically configure monitoring, alerting, backups and so forth without needing an administrator to pet its hair and tell it that it's beautiful.

Cloudphysics and VMTurbo-style applications will sniff out issues before they happen while Permabit/Datacore-style storage gateways will dynamically figure out what data needs to live on the fast local server SAN, what gets punted to mid-speed arrays and what gets bunged into self-healing object storage or cloud services.

The future is one of automation out of the box, of lashing together the many – many – parts of our existing datacenters and making the whole thing consumable as a single, transparent unit. The winner will be the company that can deliver all this in an automated fashion without requiring a room full of specialty nerds to ride herd on the stuff, do so reliably, and do so at the lowest price.

It's important to note that we're not talking about a total black box here. SDI blocks would still give systems administrators the ability to tweak, twiddle and customise. They simply wouldn't require it in the overwhelming majority of circumstances, nor would they require more setup or configuration than sitting through a (probably very lengthy) wizard answering questions.

The company formerly known as HP is most of the way towards a proper SDI implementation. It doesn't need EMC to keep customers in storage. With its growing skill at Openstack, it is close to not needing VMware for virtualisation.

HP is getting towards having orchestration software that makes Pivotal's Cloud Foundry non-requisite. HP also has enough other software, server and networking bits internally that it really don't need much in the way of anything from EMC's federation.

If HP's management ever gets its heads out of their own collective proverbial long enough to find the thing with two hands, a GPS and a Sherpa, it would be an unholy terror of omni-converged SDI awesomeness, able to scale from a simple three-node cluster up to $_Google.

Cisco is testing the waters with SimpliVity. This is currently a "friends with benefits" arrangement, but in truth Cisco will probably buy them in short order. After this, Cisco just needs a few software pieces and they're good to go with their own complete SDI stack. Cisco has the added bonus of serving a market niche that is perfectly okay with "proprietary everything", so long as that proprietary stuff is the best of the best.

VMware has seriously urinated in Cisco's Cheerios with NSX, and Cisco has in turn embraced Hyper-V and Openstack and then bit their thumb at EMC with Invicta. There's no love lost between Cisco and the EMC Federation, but if Cisco can just keep focused long enough to put the Legos together, they have a shot at the glory days of Empire, once lost but not forgotten.

Dell has an alliance with Nutanix, is a private entity, and sits on a diverse array of software and hardware internally. Dell is learning all there is to learn from Nutanix, and will probably discard it in due time. Nutanix is too big to buy and doesn't offer enough of a full SDI stack to make a merger a real consideration.

Dell can – and probably will – either build a server SAN internally or just buy Maxta. Dell will lash together its hardware, software and a server SAN and come out with a refined SDI solution for the mass market that will undercut the opposition on price. Combine this with Dell's increasing focus on managed services and there is some very serious competition to be had here.

Once Dell enters the fray with a proper SDI offering, the SDI wars will truly have begun. There will be three contenders on the field: HP, Cisco and Dell.

If VMware doesn't implode under the force of its own hubris in the next few years, it will make a fourth. EMC has all the bits required to make a fifth, but that's iffy.

Microsoft doesn't seem all that interested in playing. "Ease of use" is anathema to Microsoft of late: it is still focused on managing rather than using local infrastructure. If you want "ease of use" then you must use Azure.

Microsoft's vision is completely orthogonal to that of the rest of the industry, which seems to be rapidly moving towards an SDI block approach. Microsoft believes that everyone will place all workloads in their American public cloud, and deliver it all that yummy recurring subscription revenue. I wish it good luck, but that strategy is doomed to fail.

Not your daddy's public cloud

SDI blocks – and the wars that will define them – represent a difficult admission for the IT industry. On the one side, traditional infrastructure providers need to admit that public cloud providers were right, and companies require ease of use. They don't want to muck about with managing infrastructure, and they don't want to launch "projects" internally to work with recalcitrant orchestration software that is only one step removed from crushing up flowers and smearing them on cave walls.

On the other side, the subscription-blinded cloud providers need to accept that not only are public clouds not the right solution for all workloads, but we just flat out don't trust them with many categories of data, and never will.

The SDI wars are to be the ultimate acceptance that neither on premises nor public cloud is going to "win". It is acceptance of the fact that needs are diverse, one size never fits all and that new technologies typically supplement – rather than supplant – those that came before.

But the SDI wars will be costly. They will be research intensive. They will be acrimonious and bitter and make Google's little spat with Oracle over the patentability of APIs seem like a lovers' quarrel. Each major player will seek to make the next an irrelevant "component" of their own vertically integrated stack, ultimately leading to everyone having to buy or develop their own version of everything.

There will be bitter standards and interoperability wars and the inevitable anti-trust whinging by the underdogs once someone comes along and actually builds an SDI block that customers want, rather than that which feeds the political or economic interests of the hopeful empire builder.

It will take a decade – maybe two – for the SDI wars to fully come to a close, but if you look closely enough and talk to the right people you can see that the seeds of this conflict are sown. The major players are agreed: this is the shape of things to come. Who will ultimately win is what is as yet unknown. ®